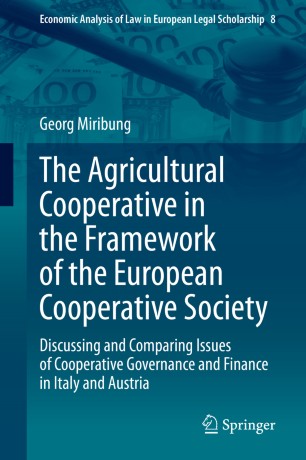 This book assesses the Statute for a European Cooperative Society (SCE) regarding agricultural activities by comparing how specific questions arising in this context must be dealt with under the Italian and Austrian legal systems. In this regard, Council Regulation (EC) No. 1435/2003, of 22 July 2003, on the Statute for a European Cooperative Society (SCE), is used as a tool for the structured analysis of various aspects of agricultural cooperatives. However, a comparison is only meaningful if the results are made comparable on the basis of a previously defined standard. Accordingly, the study uses, on one hand, a cooperative model developed by European legal scholars that defines general guidelines on how cooperatives should function (PECOL). On the other, the results are presented in connection with economic considerations to discuss how efficient rules can be developed.

Georg Miribung studied law in Innsbruck and England (Warwick) with a focus on international business law. In 2004 he received a doctorate degree in European Law from the University of Innsbruck. After several years in the banking sector Georg returned to the academic field: First to the University of Innsbruck, where he habilitated in Italian business and comparative law; since 2016 he has been working at the Free University of Bozen/Bolzano. His focus is on agricultural law, cooperative law and cooperative economic theory, comparative law, sociology of law, food law, sustainability and law.