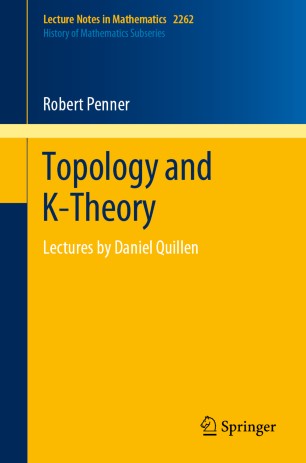 These are notes from a graduate student course on algebraic topology and K-theory given by Daniel Quillen at the Massachusetts Institute of Technology during 1979-1980. He had just received the Fields Medal for his work on these topics among others and was funny and playful with a confident humility from the start. These are not meant to be polished lecture notes, rather, things are presented as did Quillen reflected in the hand-written notes, resisting any temptation to change or add notation, details or elaborations.  Indeed, the text is faithful to Quillen's own exposition, even respecting the {\sl board-like presentation} of formulae, diagrams and proofs, omitting numbering theorems in favor of names and so on. This is meant to be Quillen on Quillen as it happened forty years ago, an informal text for a second-semester graduate student on topology, category theory and K-theory, a potential preface to studying Quillen's own landmark papers and an informal glimpse of his great mind. The intellectual pace of the lectures, namely fast and lively, is Quillen himself, and part of the point here is to capture some of this intimacy. To be sure, much has happened since then from this categorical perspective started by Grothendieck, and Misha Kapranov has contributed an Afterword in order to make it more useful to current students.