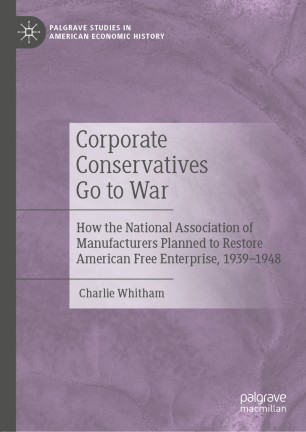 How the National Association of Manufacturers Planned to Restore American Free Enterprise, 1939–1948

World War II presented a unique opportunity for American business to improve its reputation after years of censure for inflicting the Great Depression upon the nation. No employers’ organization worked harder or devoted greater resources to reviving business prestige during the war than the National Association of Manufacturers, which spent millions of dollars on promoting the indispensability of private enterprise to the successful mobilization of the American economy in an uncompromising multi-media campaign which spanned the factory floor to the movie theatre. Now, using unpublished primary sources, the full extent of the NAM’s wartime mission to raise the stature of American business in the post-war era is revealed. During the war the NAM erected a vast structure of research on an unprecedented scale numbering more than one hundred persons dedicated to planning the best solutions for restoring American ‘free enterprise’ capitalism after the war in a direct challenge to the ‘liberal’ prescriptions of the reigning administration. These studies were painstakingly assembled and widely distributed and served as a complimentary arm to the better-known pro-business propaganda message of the organization. What emerges is a unique and telling glimpse into the minds of the corporate class of wartime America that reveals the determination of a major employers’ organization to exploit the exceptional circumstances of total war to influence both the power-brokers in Washington who wrote economic policy and the American public as a whole to embrace a post-war future ruled by private enterprise capitalism..