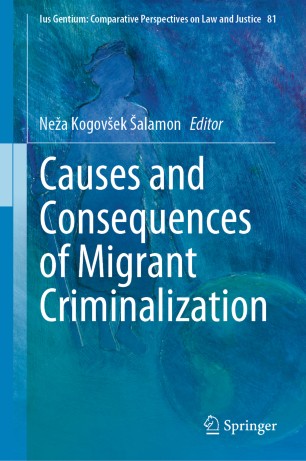 Causes and Consequences of Migrant Criminalization

The book illustrates how the trend of associating migrants and refugees with criminality is on the rise. In political discourses and popular media alike, migrants and refugees are frequently portrayed as being dangerous, while cultures intent on welcoming newcomers are increasingly seen as being naïve, and providing assistance to migrants is more and more frequently subject to administrative or criminal penalties. At the same time, nondemocratic trends and practices that violate human rights and equality are gaining momentum in Europe, the US and Australia. Racism, xenophobia and anti-Islamism are simultaneously becoming more open and public; they are no longer restricted to clandestine platforms but are increasingly being mainstreamed into the political programs of parties that are entering both the EU parliaments and member state legislatures. Similar developments can be seen in the US and Australia. Such transformations in societies, governments, and institutions seem to reflect a growing amnesia regarding the lessons of the two World Wars of the 20th century, and the role that Europe, the US and Australia played in developing a post-war legal framework based on a shared, if imperfect, commitment to human rights.

The book presents individual national analyses to reveal an emerging trend of “crimmigration” regardless of the peculiarities of national legislatures and internal political dynamics. By collecting original contributions from scholars based in and focused on each of these regions, it addresses above all the causes and impacts of the criminalization of migration in the early 21st century. It tackles the direct causes of these trends and encourages readers to rethink their broader political and socio-historic context. Importantly, the book does so by highlighting the ties between the criminalization of migration and equality, racism, and xenophobia.

As the politics of migration become more perilous for political alliances like the EU as well for individual migrants, it is more important than ever to critically examine the cause and consequences of migrant criminalization. This collection does so from a variety of disciplinary perspectives and political traditions, seeking to overcome the distractions of charismatic politicians and the peculiar factions of national political systems, in order to reveal the underlying trends and disturbing patterns that are of interest to a broad, internationally-focused audience.

Neža Kogovšek Šalamon is a Senior Researcher and Director of the Peace Institute, Slovenia. As a Ron Brown Fellow (2003/04), she holds an LL.M. in International Human Rights Law from the University of Notre Dame, USA (2004) and a PhD in law from the University of Ljubljana (2011). She was a Visiting Researcher at the University of Palermo (2016). She is a member of the Odysseus Academic Network, ILA Committee on Human Rights in Times of Emergency, and ECRI at the Council of Europe (2018). She was voted among the top 10 most influential lawyers in Slovenia (2016) and was nominated as a member of 40 Young European Leaders (2017).