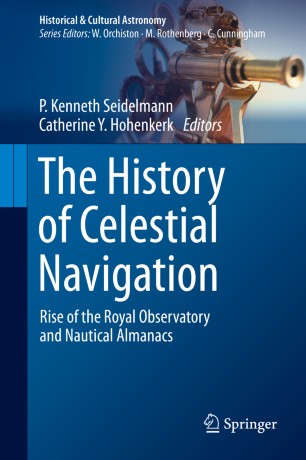 The History of Celestial Navigation

Rise of the Royal Observatory and Nautical Almanacs

This edited volume charts the history of celestial navigation over the course of five centuries. Written by a group of historians and scientists, it analyzes how competing navigation systems, technologies, and institutions emerged and developed, with a focus on the major players in the US and the UK.

The history covers the founding of the Royal Observatory; the first printing of a Nautical Almanac; the founding of the US and UK Nautical Almanac Offices; the creation of international standards for reference systems and astronomical constants; and the impact of 20th century technology on the field, among other topics. Additionally, the volume analyzes the present role and status of celestial navigation, particularly with respect to modern radio and satellite navigation systems.

With its diverse authorship and nontechnical language, this book will appeal to any reader interested in the history of science, technology, astronomy, and navigation over the ages.

Dr. P. Kenneth Seidelmann received an Electrical Engineering degree from the University of Cincinnati in 1960, followed by a Master of Science degree in 1962 and a Doctor of Philosophy degree in Dynamical Astronomy in 1968. After military service as a Research and Development Coordinator at the US Army Missile Command from 1963 to 1965, he joined the Nautical Almanac Office of the US Naval Observatory. In February 1976, he was named Director of the Nautical Almanac Office. In September 1990, the Nautical Almanac Office was reorganized into two departments and he became director of the Orbital Mechanics Department. In June 1994, the US Naval Observatory was reorganized and Dr. Seidelmann became Director of the Directorate of Astrometry, which included three departments dealing with astrometry and astronomical data. In 2000 he retired from the US Naval Observatory and became a research professor in the Astronomy Department of the University of Virginia.
Dr. Seidelmann has taught courses in Celestial Mechanics at Catholic University of America and the University of Maryland. He is coauthor of three books, “Fundamentals of Astrometry”, “TIME, From Earth Rotation to Atomic Physics” (1st and 2nd Editions), and “Celestial Mechanics and Astrodynamics: Theory and Practice”. Additionally, he is coeditor of the “Explanatory Supplement to the Astronomical Almanac”.
Dr. Seidelmann is a member of the International Astronomical Union, American Astronomical Society, American Institute of Astronautics and Aeronautics, Sigma Xi, Tau Beta Pi, Eta Kappa Nu, and Omicron Delta Kappa, and a fellow of the American Association for the Advancement of Science, Institute of Navigation, and the Royal Astronomical Society.

Catherine Hohenkerk started her working life straight from school in 1971, at Royal Greenwich Observatory (RGO). She spent the first four years in the Solar Department while studying (day-release) for a Higher National Certificate in mathematics, statistics and computing.  Next, a useful period in the Computer Department while pursuing a day release mathematics degree. In the late 1970s she transferred to HM Nautical Almanac Office, where she remained until she retired at the end of January 2017.  Her work has involved all aspects of the generation, production and printing of the data and tables in all the almanacs and associated publications of HMNAO. In 2005 she received the US Naval Observatory’s Superintendents award for her “distinguished service and extraordinary dedication to the joint publications”.