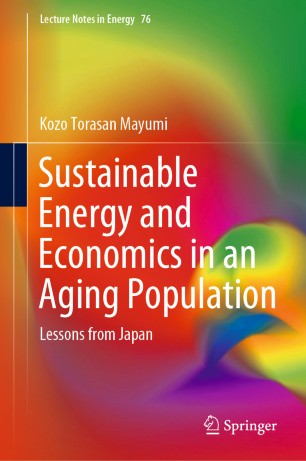 Sustainable Energy and Economics in an Aging Population

This book discusses current challenges in Japan, focusing on the nation’s rapidly aging population and low birth rate, along with persistent public bond issues with heavy interest payments, the potential collapse of social security systems, and income inequality, as well as the global picture.
In turn, it examines the accessibility of global fossil fuels and feasibility of large-scale solar energy use. A new theory of money, interest, and capital is put forward, together with a proposal for an alternative system of international monetary cooperation, to promote a more sustainable and equitable world. Specific topics discussed include
• the inverted population pyramid, due to the dramatic change in human life spans and declining birth rates;
• the rapidly shrinking workforce, aging population, and declining GDP share sourced from industry;
• disproportionate debt expansion due to public bond issues and coping with a persistent budget deficit;
• the potential collapse of social security systems combined with income inequality; and
• how to mitigate these bio-economic predicaments.
Global Energy Sources offers an essential guide for policymakers, economists, researchers, and all those concerned with establishing a sustainable and equitable society from both energy and monetary perspectives. Further, it will be of interest to readers around the world, as the lessons learned from Japan are crucial to other developed societies that may eventually face the same types of challenge.

Kozo Mayumi graduated from the Graduate School of Engineering at the Department of Applied Mathematics and Physics of Kyoto University. Between 1984 and 1988 he studied bioeconomics at Department of Economics of Vanderbilt University under Prof. Nicholas Georgescu-Roegen’s supervision. Since then, Mayumi has been working in the field of energy analysis, ecological economics and sustainability issues. Mayumi is a full professor at Tokushima University, Japan, and currently editorial board members of Ecological Economics, International Journal of Ecological Economics and Statistics, Journal of Economic Structures, and Ecosystem Services. Together with Dr. Mario Giampietro and other three researchers Mayumi started a biennial international workshop (Advances in Energy Studies) in 1998 where many distinguished scholars in the field of energy analysis took part. Mayumi is the first recipient of Georgescu-Roegen Awards (Unconventional Thinking Category) at the 13th Delhi Sustainable Development Summit in 2013.