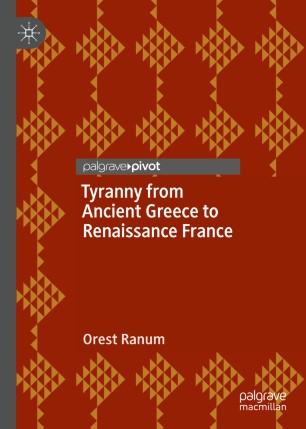 This Palgrave Pivot examines how prominent thinkers throughout history, from ancient Greece to sixteenth-century France, have perceived tyrants and tyranny. Ancient philosophers such as Plato and Aristotle were the first to build a vocabulary for tyrants and the forms of government they corrupted. Thirteenth century analyses of tyranny by Thomas Aquinas and John of Salisbury, revived from Antiquity, were recast as short observations about what tyrants do. They claimed that tyrants govern for their own advantage, not for the people. Tyrants could be usurpers, increase taxes, and live in luxury. The list of tyrannical actions grew over time, especially in periods of turmoil and civil war, often raising the question:  When can a tyrant be legitimately deposed or killed? In offering a brief biography of these political philosophers, including Machiavelli, Erasmus, More, Bodin, and others, along with their views on tyrannical behavior, Orest Ranum reveals how the concept of tyranny has been shaped over time, and how it still persists in political thought to this day.
Orest Ranum is professor emeritus at the Johns Hopkins University, Maryland, USA, and the author of several books including Artisans of Glory(1980), The Fronde, a French Revolution (1993), and Les bienfaits, la gratitude et l'action politique (2018).