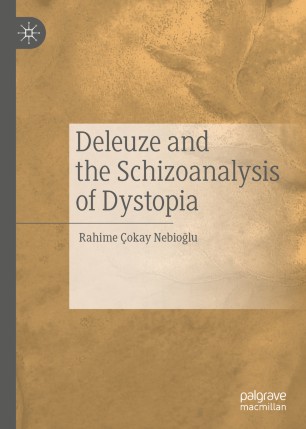 Deleuze and the Schizoanalysis of Dystopia

This book offers an insightful history of dystopian literature, integrating it  within the conceptual schemas of Deleuze and Guattari. Unlike earlier examples of dystopia which depict representations of a possible future that is remarkably worse than present society, contemporary dystopia often tends to portray an almost allegorical re-presentation of present society.  Tracing dystopia’s shift from transcendence towards immanence with the rise of late neoliberal capitalism and control-societies, Çokay Nebioğlu skilfully constructs a new taxonomy of dystopian fiction to address this changing dynamic.

Accompanied by a subtle exploration of earlier and later examples of the genre by George Orwell, Aldous Huxley, Suzanne Collins, Veronica Roth, William Gibson, Max Barry, Dave Eggers, Cindy Pon, and Tahsin Yücel along with rich and nuanced analysis of China Mieville’s Perdido Street Station and Margaret Atwood’s MaddAddam trilogy, the book seeks not only to track the transformation of dystopia in light of worldwide cultural, political and economic transformation, but also to conduct a schizoanalytic reading of dystopia, thus opening up an exciting field of enquiry for Deleuzian scholars.

Rahime Cokay Nebioglu is a former Fulbright Scholar in the Literature Program at Duke University, USA, and is currently working as a research assistant at Gazi University, Turkey. She also serves as the non-fiction editor of the Journal of Absurdity and Horror.