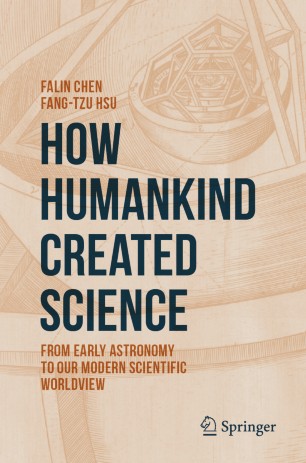 From Early Astronomy to Our Modern Scientific Worldview

The development of science has been an ideological struggle that lasted over three millennia. At and after the times of the Babylonian Empire, however, the pace of scientific evolution was painfully slow. This situation changed after Copernicus kick-started the Scientific Revolution with his heliocentric theory. Newton’s law of universal gravitation transformed natural philosophy, previously focused on mythology and abstract philosophical thinking, into an orderly and rational physical science. Einstein’s redefinition of space and time revealed a new and central principle of the Universe, paving the way for the huge amounts of energy held deep inside physical matter to be released. To this day, many of the our known physical theories represent an accumulation of changing knowledge over the long course of scientific history. But what kind of changes did the scientists see? What questions did they address? What methods did they use? What difficulties did they encounter? And what kind of persecution might they have faced on the road to discovering these beautiful, sometimes almost mystical, ideas? This book’s purpose is to investigate these questions. It leads the reader through the stories behind major scientific advancements and their theories, as well as explaining associated examples and hypotheses. Over the course of the journey, readers will come to understand the way scientists explore nature and how scientific theories are applied to natural phenomena and every-day technology.

Falin Chen Since joining the faculty of the Institute of Applied Mechanics of National Taiwan University in 1989, Professor Falin Chen has devoted himself to three major research fields. Firstly, the stability of fluid flow, which applies to various engineering disciplines, such as alloy casting, film coating, underground water motion, jet, gravity current, and so on. Secondly, the engineering applications by analyzing the ventilation in road tunnels and subway systems to comply with the booming infrastructure development in Taiwan. Recently, due to the global warming issue and the difficult energy situation of Taiwan, he has devoted most of his research effort to energy-related researches, such as the Kuroshio power harness, the water and thermal management of the hydrogen fuel cells, the strategy of CO2 emission abatement. In the past three decades, he has been the author or co-author of more than 110 papers, all are refereed and published in internationally renowned journals such as J. Fluid Mech., Physics of Fluids, Physical Rev. E, Appl. Mech. Rev. (ASME), J. Heat Trans. (ASME), Int. J. Heat Mass Trans., J. Appl. Physics, and J. Power Sources.

Fang-Tzu Hsu participated, as representative of Taiwan, in the 2016 International Physics Olympiad held in Zurich, where he won the gold medal award. This prestigious award gained him admission to the National Taiwan University School of Medicine, where he is now a junior. In 2018, he worked as a research assistant for Professor Falin Chen contributing to the preparation of the book “How Humankind Created Science”.