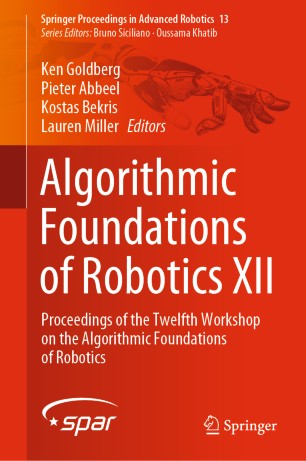 Proceedings of the Twelfth Workshop on the Algorithmic Foundations of Robotics

This book presents the outcomes of the 12th International Workshop on the Algorithmic Foundations of Robotics (WAFR 2016). WAFR is a prestigious, single-track, biennial international meeting devoted to recent advances in algorithmic problems in robotics. Robot algorithms are an important building block of robotic systems and are used to process inputs from users and sensors, perceive and build models of the environment, plan low-level motions and high-level tasks, control robotic actuators, and coordinate actions across multiple systems. However, developing and analyzing these algorithms raises complex challenges, both theoretical and practical. Advances in the algorithmic foundations of robotics have applications to manufacturing, medicine, distributed robotics, human–robot interaction, intelligent prosthetics, computer animation, computational biology, and many other areas.

The 2016 edition of WAFR went back to its roots and was held in San Francisco, California – the city where the very first WAFR was held in 1994. Organized by Pieter Abbeel, Kostas Bekris, Ken Goldberg, and Lauren Miller, WAFR 2016 featured keynote talks by John Canny on “A Guided Tour of Computer Vision, Robotics, Algebra, and HCI,” Erik Demaine on “Replicators, Transformers, and Robot Swarms: Science Fiction through Geometric Algorithms,” Dan Halperin on “From Piano Movers to Piano Printers: Computing and Using Minkowski Sums,” and by Lydia Kavraki on “20 Years of Sampling Robot Motion.” Furthermore, it included an Open Problems Session organized by Ron Alterovitz, Florian Pokorny, and Jur van den Berg. There were 58 paper presentations during the three-day event.

The organizers would like to thank the authors for their work and contributions, the reviewers for ensuring the high quality of the meeting, the WAFR Steering Committee led by Nancy Amato as well as WAFR’s fiscal sponsor, the International Federation of Robotics Research (IFRR), led by Oussama Khatib and Henrik Christensen. WAFR 2016 was an enjoyable and memorable event.