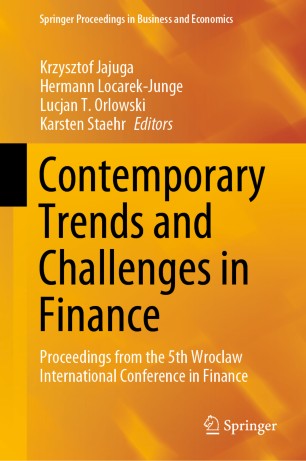 Contemporary Trends and Challenges in Finance

Proceedings from the 5th Wroclaw International Conference in Finance

This volume features a selection of contributions presented at the 2019 Wroclaw Conference in Finance, covering a wide range of topics in finance and financial economics, e.g. financial markets; monetary policy; corporate, personal and public finance; and risk management and insurance. Reflecting the diversity and richness of research in the field, the papers discuss both fundamental and applied finance, and offer a detailed analysis of current financial-market problems, including specifics of the Polish and Central European markets. They also examine the results of advanced financial modeling. Accordingly, the proceedings offer a valuable resource for researchers at universities and policy institutions, as well as graduate students and practitioners in economics and finance at both private and government organizations.

Krzysztof Jajuga is a Professor and chair of the Department of Financial Investments and Risk Management at Wroclaw University of Economics, Poland. He obtained his doctoral degree in Economics from the same university in 1982. At the beginning of his scientific career he received a Fulbright grant to study at Stanford University’s Department of Statistics. He has since been a Visiting Professor at various universities in the USA, as well as in Europe and China. His main research interests are financial econometrics, capital markets and risk analysis and management. He is also President of the CFA Society Poland.
Hermann Locarek-Junge has been a Professor of Finance and Financial Services at the TU Dresden since 1995. He completed his PhD at the University of Augsburg, Germany in 1987. He also studied business informatics and was appointed a Professor in that field at Essen University, Germany, in 1991. Since then, he has been a Visiting Professor and Research Fellow at various international institutions and universities. Throughout his career, he has undertaken research work for several banks and organizations, including the Deutsche Bank, Dresdner Bank, Sparkasse Dresden, Union Investment, and the German National Research Foundation (DFG).
Lucjan T. Orłowski is a Professor of Economics and Finance and a Director of the Doctor of Business Administration in Finance Program at Sacred Heart University, USA. His research interests include monetary economics, financial markets and institutions, and financial stability. He has authored numerous books, chapters in edited volumes and articles in scholarly journals.   He has been visiting professor and research fellow at many prominent international institutions and universities and served in an advisory role for many governments and financial institutions including Polish Ministry of Finance and National Bank of Poland. He has worked with the European Commission Economic and Finance Committee on the post-crisis policy responses to extreme risks in financial markets. He is collaborating with Chicago Mercantile Exchange Group on analyzing the volatility of financial futures and its impact on real economy.  He is a Doctor Honoris Causa recipient from Wrocław University of Economics.
Karsten Staehr is a Professor of Economics at Tallinn University of Technology, Estonia and also a research supervisor at the Bank of Estonia. He holds a master’s degree from the Massachusetts Institute of Technology and master’s and PhD degrees from the University of Copenhagen, Denmark. His main research interests are macroeconomics, international finance, public economics and transition studies. He is an associate editor of the Baltic Journal of Economics and serves on the editorial board of Post-Communist Economies and Economic Systems.
​