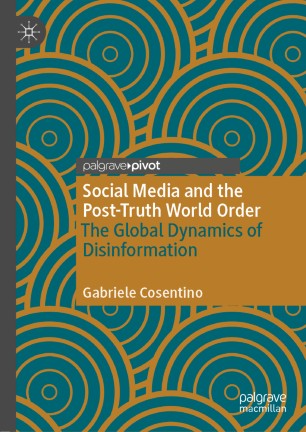 The Global Dynamics of Disinformation

“This book convincingly argues that the truth of the post-truth condition is not to be found in the details but within a global discursive space where state and non-state actors, established powers and emerging political networks, build surprising alliances to hegemonize the public sphere and upend the post-1989 world order.”

“Finally, we have a theory of post-truth that emerges from a global analysis. Social Media and the Post-Truth World Order is a welcome contribution to post-truth studies.”

“This timely book demonstrates that post-truth is not some isolated manifestation of fakery, but a collective domain that spans the world as an alternative self-sustaining universe. The result is a must-read book that lays bare the emergent post-truth world order.”

This book discusses post-truth not merely as a Western issue, but as a problematic political and cultural condition with global ramifications. By locating the roots of the phenomenon in the trust crisis suffered by liberal democracy and its institutions, the book argues that post-truth serves as a space for ideological conflicts and geopolitical power struggles that are reshaping the world order. The era of post-truth politics is thus here to stay, and its reach is increasingly global: Russian trolls organizing events on social media attended by thousands of unaware American citizens; European social media users spreading fictional political narratives in support of the Syrian regime; Facebook offering a platform for a harassment campaign by Buddhist ultranationalists in Myanmar that led to the killing of thousands of Muslims. These are just some of the examples that demonstrate the dangerous effects of the Internet-driven global diffusion of disinformation and misinformation. Grounded on a theoretical framework yet written in an engaging and accessible way, this timely book is a valuable resource for students, researchers, policymakers and citizens concerned with the impact of social media on politics.

Gabriele Cosentino is an independent researcher working on Political Communication and Disinformation. He owns a PhD in Media, Culture and Communication from New York University, USA.