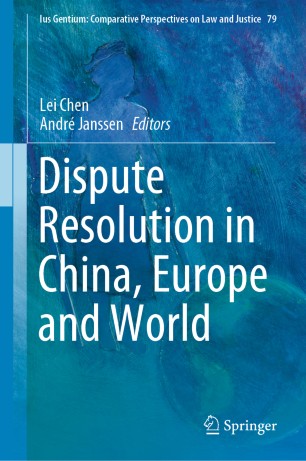 This book brings together articles from leading experts in the field of international dispute resolution. The main focus is on the situation in Asia, though the European perspective also plays an important part. Accordingly, the focus on the Asian dispute resolution market with a distinctly American and European “touch” is one of the book’s most unique features.

Lei Chen is Associate Professor at School of Law, City University of Hong Kong until June, 2020. He becomes Chair of Chinese Law and co-Director of Centre for Chinese Law and Policy, Durham University, UK since July, 2020.  He is also Eastern Scholar Professor of Law at East China University of Political Science and Law. He is on the Law Panel of Hong Kong Research Assessment Exercise 2020. His research areas are Chinese and comparative private laws and dispute resolution. He is a seasoned arbitrator at a number of arbitration institutions in Asia and Europe.

André Janssen is a Chair Professor at the Radboud University Nijmegen, The Netherlands. He has published more than 100 books and articles in the field of private, European and comparative law, and he is the co-chief-editor of the European Review of Private Law (ERPL) and the head of the German editorial committee of the Italian law journal Contratto e impresa/Europa.