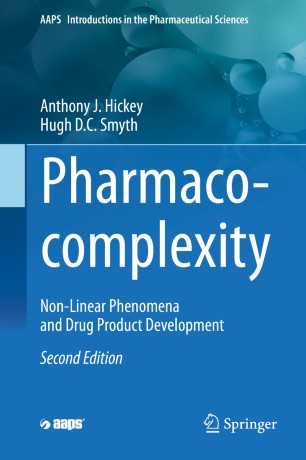 Non-linear phenomena pervade the pharmaceutical sciences.  Understanding the interface between each of these phenomena and the way in which they contribute to overarching processes such as pharmaceutical product development may ultimately result in more efficient, less costly and rapid implementation. The benefit to Society is self-evident in that affordable treatments would be rapidly forthcoming. We have aggregated these phenomena into one topic “Pharmaco-complexity: Non-linear Phenomena and Drug Product Development”.

Dr. Anthony Hickey is Distinguished Fellow of RTI International, the Director of the UNC Catalyst for Rare Diseases and Professor of Molecular Pharmaceutics of the Eshelman School of Pharmacy and Biomedical Engineering at the University of North Carolina at Chapel Hill. He is a fellow of the American Association for the Advancement of Science, the American Association of Pharmaceutical Scientists the Royal Society of Medicine and the Royal Society of Biology. He has published several edited and authored volumes in the fields of pharmaceutical aerosols, process engineering and particulate science. Dr. Hugh Smyth is the Alan W. Hamm Centennial Fellow and Professor of Molecular Pharmaceutics and Drug Delivery at the University of Texas at Austin. He is the Editor in Chief of Drug Development and Industrial Pharmacy, a recipient of the Young Investigator in Pharmaceutics and Pharmaceutical Technology Award of the American Association of Pharmaceutical Scientists and has edited several volumes on pulmonary drug delivery. Drs. Hickey and Smyth share a research interest in the delivery of drugs to the lungs for the treatment and prevention of several diseases.

Hugh D. C. Smyth is the Hamm Endowed Faculty Fellow and Professor of Pharmaceutics with Tenure, College of Pharmacy, The University of Texas at Austin. He is also an Adjunct Associate Scientist at the Lovelace Respiratory Research Institute, Albuquerque, NM. He is also the Editor in Chief of Drug Development and Industrial Pharmacy. He has over 130 peer reviewed publications, editor of 3 books, 25 book chapters, and over 20 patents or patent applications. He has a Pharmacy and a Ph.D. degree from the University of Otago, New Zealand. He was the American Association of Pharmaceutical Scientists (AAPS) New Investigator award winner for Pharmaceutics and Pharmaceutical Technologies. He also received the PhRMA Foundation New Investigator Award in pharmaceutics. His laboratory focuses on novel drug delivery systems. Dr. Smyth has started several companies resulting from technologies discovered in his laboratory including Respira Therapeutics, Nob Hill Therapeutics, and Via Therapeutics.