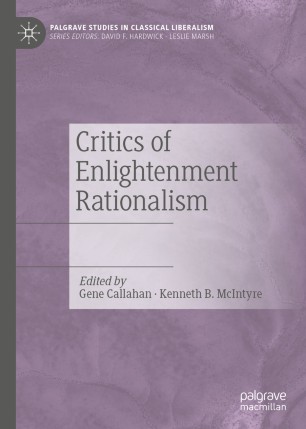 This book provides an overview of some of the most important critics of “Enlightenment rationalism.”  The subjects of the volume—including, among others, Burke, Kierkegaard, Nietzsche, T.S. Eliot, Wittgenstein, Heidegger, C.S. Lewis, Gabriel Marcel, Russell Kirk, and Jane Jacobs—do not share a philosophical tradition as much as a skeptical disposition toward the notion, common among modern thinkers, that there is only one standard of rationality or reasonableness, and that that one standard is or ought to be taken from the presuppositions, methods, and logic of the natural sciences.

Eugene Callahan teaches at New York University. He is the author of Economics for Real People (2002), Oakeshott on Rome and America (2012), and co-editor of Tradition v. Rationalism (2018).

Kenneth B. McIntyre is Professor of Political Science at Sam Houston State University. He is the author of The Limits of Political Theory: Michael Oakeshott on Civil Association (2004) and Herbert Butterfield: History, Providence, and Skeptical Politics (2012).

“Callahan and McIntyre have brought together a distinguished and cosmopolitan array of contributors who have produced a lively and provocative collection of essays exploring and analyzing the modern phenomenon of Enlightenment rationalism, whose distinguished critics range from the historically important Edmund Burke, Alexis de Tocqueville, and Friedrich Nietzsche, to our near contemporaries Hans-Georg Gadamer, Eric Voegelin and Michael Oakeshott. The connecting and fascinating thread that runs through the volume is a relentless critique of a style of thinking that prioritizes the pursuit of certainty, and a blind belief in the powers of instrumental reason to overcome all adversity.”
—David Boucher, Professor of Political Philosophy and International Relations, Cardiff University, UK

“This volume could not have arrived at a better time. McIntyre and Callahan have given us an excellent set of essays that speaks directly to the fetishization of human reason. Each of the thinkers examined reminds us of the fallibility of human beings—a lesson we sorely need to revisit every generation or so.”
–Richard Avramenko, Professor, Department of Political Science, University of Wisconsin-Madison, USA

“This is a remarkable and remarkably comprehensive collection on thinkers who questioned enlightenment rationalism, both in the nineteenth and twentieth century. The list is impressive: Tocqueville, Kierkegaard, Burke, Nietzsche, Eliot, as well as Oakeshott, Hayek, Alasdair MacIntyre, and a number of others equally stellar, and equally deep and complex. The essays are by accomplished scholars, and show that the opposition to enlightenment rationalism was both diverse and strikingly coherent, and a treasure trove for thinking beyond the enlightenment. It will be especially valuable for those with interests in one of these thinkers to see them in the context of the larger fraternity to which they belong.”
–Stephen Turner, Distinguished University Professor of Philosophy, University of South Florida, USA

"The variety of topics considered, the range of thinkers included, the striking and ultimately illuminating juxtaposition of approaches combine to cast, not a spotlight, but indeed multiple of points of light on a rich selection of important thinkers from the later-modern period. Scholars and students interested in modern critics of modernity will benefit from the range of figures treated here and the depth of the commentaries on them."
–Alexander S. Duff, Assistant Professor of Political Science, University of North Texas, USA