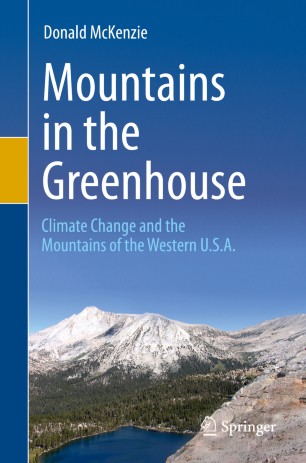 Mountains in the Greenhouse

Climate Change and the Mountains of the Western U.S.A.

This book is written for general readers with an interest in science, and offers the tools and ideas for understanding how climate change will affect mountains of the American West. A major goal of the book is to provide material that will not become quickly outdated, and it does so by conveying its topics through constants in ecological science that will remain unchanged and scientifically sound. The book is timely in its potential to be a long-term contribution, and is designed to inform the public about climate change in mountains accessibly and intelligibly.
The major themes of the book include: 1) mountains of the American West as natural experiments that can distinguish the effects of climate change because they have been relatively free from human-caused changes, 2) mountains as regions with unique sensitivities that may change more rapidly than the Earth as a whole and foreshadow the nature and magnitude of change elsewhere, and 3) different interacting components of ecosystems in the face of a changing climate, including forest growth and mortality, ecological disturbance, and mountain hydrology. Readers will learn how these changes and interactions in mountains illuminate the complexity of ecological changes in other contexts around the world.

Dr. Donald McKenzie is a research ecologist at the University of Washington who focuses on wildfire, landscape ecology, and climate change. His studies explore spatial pattern and structure in low-severity fire regimes, the effects of wildfire on regional air quality, effects of climate change on disturbance regimes and mountain forest ecosystems in the American West, landscape mapping of wildland fuels at multiple scales, and carbon emissions from wildfire in North America. Previously he has worked on climatic variability and tree species' responses, dendrochronological methods, understory plant responses to overstory changes, and empirical models of forest growth.