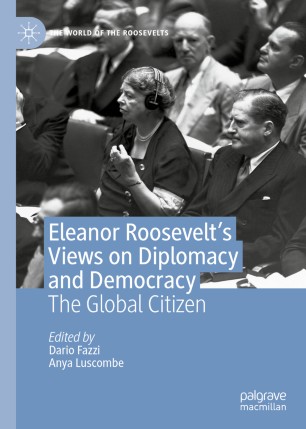 "This volume fills a void in current studies of Eleanor Roosevelt. Offering a comprehensive analysis of Roosevelt as a diplomat during the Cold War era, it is particularly insightful in analyzing her position on United States race relations while at the United Nations. It provides a new look at Roosevelt’s leadership from an American perspective played out on a global stage."
- Maurine H. Beasley, Professor Emerita, University of Maryland College Park, USA
This book focuses on Eleanor Roosevelt’s multifaceted agenda for the world. It highlights her advocacy of human rights, multilateral diplomacy, and transnationalism, and it emphasizes her challenge to gendered norms and racial relations. The essays of this collection describe Eleanor Roosevelt as a public intellectual, a politician, a public diplomat, and an activist. She was, undeniably, one of the protagonists of the twentieth century and a proactive interpreter of the many changes it brought about. She went through two world wars, the harshness of the Great Depression, and the emergence of nuclear confrontation, and she deciphered such crises as the product of misleading nationalism and egoism. Against them, she offered her commitment to people’s education as an example of civic engagement, which she considered necessary for the functioning of any democratic order. Such was the world Eleanor Roosevelt envisioned and tried to build – symbolically and practically – one where people, the citizens of the world, may really be at the center of international affairs.

Dario Fazzi is a historian of US social and foreign policy history and works at the Roosevelt Institute for American Studies. He studies US cold-war relations and his main field of research lies in peace history and transatlantic history. He is the author of Eleanor Roosevelt and the Anti-Nuclear Movement: The Voice of Conscience (Palgrave, 2016) and has published articles, book chapters, and reviews on nuclear culture, peace movements, youth protests, transatlantic crossings, and base politics.
Anya Luscombe is associate professor of media at University College Roosevelt, where she teaches Rhetoric and Journalism, and affiliated researcher at the University of Utrecht’s Department of Media and Culture Studies. Her research interests include radio history, cultural history and Eleanor Roosevelt. She is the author of BBC Radio News, from the swinging sixties to the turbulent noughties (2013) and has published articles, book chapters and reviews on media, (transnational) broadcasting and women’s history.