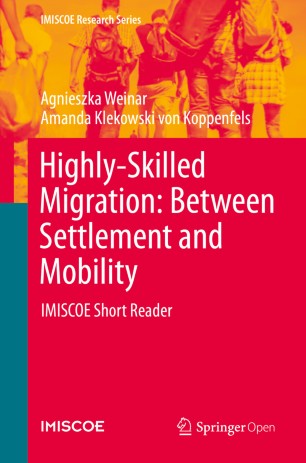 Highly-Skilled Migration: Between Settlement and Mobility

This open access short reader discusses the emerging patterns of sedentary migration versus mobility of the highly-skilled thereby providing a comprehensive overview of the recent literature on highly-skilled migration. Highly-skilled migrations are arguably the only non-controversial migrant category in political and public discourse. The common perception is that highly-skilled migrants are high-earners with top educational skills and that they are easy to integrate. These perceptions make them a “wanted” migrant. There seems to be however a big divide between the popular perceptions of this migration and its realities uncovered in social research. This publication closes this divide by delving deeper in the variety of experiences, discourses and realities of highly skilled migrants, thereby uncovering the inherent divides between the highly skilled migrants from the North and the South. The reader shows that these divides are constructed realities, shaped by the state policies and underpinned by social imaginary. Written in an accessible language this reader is a perfect read for academics, students and policy makers and all those unfamiliar with the topic.

Agnieszka Weinar is an Adjunct Research Professor at the Institute of European and Russian Studies at Carleton University. In 2011-2017 she was a researcher and scientific coordinator at the European University Institute in Florence. Her professional experience includes academic positions at the University of Warsaw as well as policy-making positions at the European Commission. Her research interests address external aspects of the EU migration policy and include questions of Europeanization in the EU neighbourhood, global human capital flows, labour migration to the EU, emigration from the EU, return migration, as well as migration and development agenda. Currently she is exploring the impact of new technologies on the research-policy communication in the field of migration studies. Apart from a wide range of policy papers and research reports, she has published articles in Journal of Migration and Ethnic Studies, International Migration, Journal of Migration and Refugee Studies, she authored a number of chapters in edited volumes and co-edited four volumes on a variety of migration issues.

Amanda Klekowski von Koppenfels received her PhD in Government and MA in Germany and European Studies from Georgetown University, Washington, DC. She received an AB from Harvard University. Prior to teaching at the University of Kent, she held positions at the University of Münster (Germany) and at the International Organization for Migration. Since being at Kent, she has been Visiting Scholar at Harvard University's Center for European Studies 2012-13 and Visiting Professor at the University of Vienna, in the Research Group Politics of Inclusion and Exclusion, in Autumn 2009. Her most recent publications include Migrants or Expatriates? Americans in Europe (Palgrave-Macmillan, 2014), "'The distance between us': a comparative examination of the technical, spatial and temporal dimensions of the transnational social relationships of highly skilled migrants" (with Louise Ryan and Jon Mulholland) in Global Networks,  " 'Gotta go visit family': Reconsidering the relationship between tourism and transnationalism" (with Louise Ryan and Jon Mulholland) in Population, Space and Place and "Americans Abroad: A Disillusioned Diaspora?

Dr. Klekowski von Koppenfels' current research interests focus on the concept of diaspora and transnational engagement of migrants, in particular with respect to Global North migrants, although she remains interested in the phenomena more broadly. Her most recent research has focused on the integration, identity and transnational engagement of Americans in Europe. She poses the question, with respect to Americans, "What is a migrant?" Her other research interests include citizenship, the political participation of migrants in host societies and co-ethnic return migration, in particular with respect to the post-war evolution of German citizenship policy. She is also interested in the interaction between formal and substantive citizenship and the interaction between integration and transnationalism. She has conducted both qualitative and quantitative research.