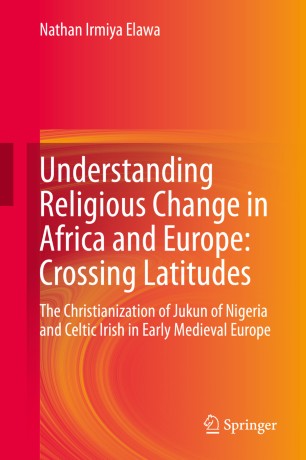 This book examines and compares the religious experience of an African group with a European one. It offers an ethnographical investigation of the Jukun of north central Nigeria. The author also organically weaves into the narrative the Christianization of the Irish in a comparative fashion. Throughout, he makes the case for an African Christianity connected to a Celtic Irish Christianity and vice-versa -- as different threads in a tapestry.

This work is a product of a synthesis of archival research in three continents, interviews with surviving first-generation Christians who were active practitioners of the Jukun indigenous religion, and with former missionaries to the Jukun. On the Irish side, it draws from extant primary sources and interviews with scholars in Celtic Irish studies. In addition, pictures, diagrams, and excerpts from British colonial and missionary journals provide a rich contextual understanding of Jukun religious life and practices.

Nathan Elawa’s book is a timely and welcomed intervention on the scholarship of African Religions that locates Jukun religion in the historical, theoretical, and methodological studies of African religions. Elawa brings together several generations of scholarship into dialogue without “sacrificing” the specificity of Jukun religious life and his own astute creative interpretation; an amazing achievement.

-Elias Kifon Bongmba, Editor of The Routledge Companion to Christianity in Africa

In this thoughtful study, Nathan Elawa argues that while religious change is a given, local dynamics vary according to historical particulars and cultural context.  Using cross-cultural examples of the Christianization process, with gratifying attention to indigenous religion and culture, he advocates for a more polycentric and experience-based approach to Christian expansion in different regions. This approach is undergirded by the author’s helpful distillations of significant trends in studies of African religions and of World Christianity.

Nathan Elawa born in Wukari, Nigeria studied Comparative Literature in English at the University of Maiduguri, Nigeria. After years in nonprofit, he completed two graduate degrees at Regent College in Vancouver, Canada. In his doctorate, he examined religious change among the Jukun and Irish. He is also a musician.