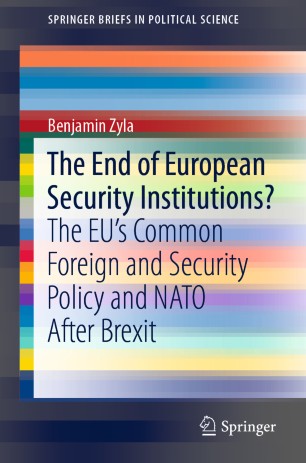 The End of European Security Institutions?

This book discusses Brexit’s implications for the two most important security institutions in Europe, the EU’s Common Foreign and Security Policy (CFSP) and the North Atlantic Treaty Organization (NATO). While Brexit is still unfolding, this book asks what it would mean for the future embedding of the UK into CFSP and NATO, as well as how it will most likely affect the inner mechanics of the transatlantic alliance (NATO) and CFSP in particular, in the years to come. The book is divided into two parts. Part I provides a historical overview of the evolution of the relationships between the UK and NATO and the EU, respectively. Part II discusses the geopolitical contexts and potential impacts of Brexit, focusing on the contemporary security environment, as well as the options that the EU has, in the event an agreement is concluded. Using both predictive and normative arguments, this book provides likely scenarios for an event that continues to be a source of much uncertainty for the global community.

Benjamin Zyla is Visiting Scholar in the Department of Government at Harvard University (US) and Associate Professor (tenured) of International Affairs in the School of International Development & Global Studies at the University of Ottawa (Canada).

Arnold H. Kammel is Chief of Staff of the Office of the Minister of National Defense, Austria, and Vice-President at the Austrian Institute for European and Security Policy (AIES) in Vienna. He holds a Doctor of Law degree from the University of Graz (Austria).