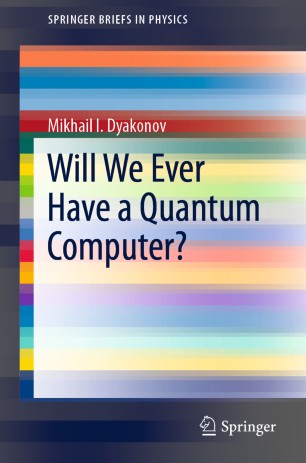 Will We Ever Have a Quantum Computer?

This book addresses a broad community of physicists, engineers, computer scientists and industry professionals, as well as the general public, who are aware of the unprecedented media hype surrounding the supposedly imminent new era of quantum computing. The central argument of this book is that the feasibility of quantum computing in the physical world is extremely doubtful. The hypothetical quantum computer is not simply a quantum variant of the conventional digital computer, but rather a quantum extension of a classical analog computer operating with continuous parameters. In order to have a useful machine, the number of continuous parameters to control would have to be of such an astronomically large magnitude as to render the endeavor virtually infeasible. This viewpoint is based on the author’s expert understanding of the gargantuan challenges that would have to be overcome to ever make quantum computing a reality. Knowledge of secondary-school-level physics and math will be sufficient for understanding most of the text; the few paragraphs that are more technical are highlighted in italics.

Mikhail Dyakonov received his PhD (1966) in theoretical physics from the Ioffe Physical-Technical Institute in Saint Petersburg (Leningrad), USSR. He worked as a Principal Scientist at the Ioffe Institute until 1998, when he became a Professor at the University of Montpellier, France. His fields of interest include quantum effects in atomic physics, solid-state physics, spin physics, and the physics of 2D electrons. He is the recipient of the State Prize of the USSR, the Beller Lectureship Award from the American Physical Society, and the Félix Robin great prize of the French Physics Society.

His name is associated with several physical phenomena: the Dyakonov-Perel spin relaxation mechanism, Dyakonov surface waves, and Dyakonov-Shur plasma wave instability. Together with V.I. Perel, in 1971 he predicted the Spin Hall Effect, which has since become a subject of great interest and intensive study. He is the editor of the book Spin Physics in Semiconductors, published by Springer in 2008 (1st edition) and 2017 (2nd edition).