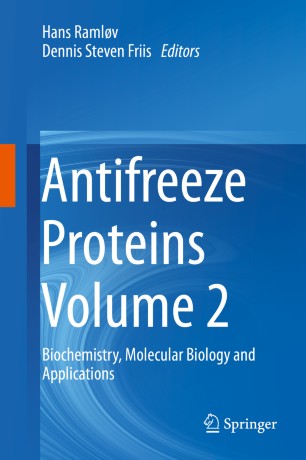 This second volume, written in four parts, offers the reader a thorough review on molecular, structural and applied aspects of antifreeze proteins. The first part treats the structure-function relationship and the physicochemical properties of antifreeze proteins; the second part provides insight into molecular mechanisms affected by antifreeze proteins; the third part presents some of the potential applications in various professional sectors and in the last part the book content is summarized and future research directions and ideas are discussed. Together with the first volume on the environment, systematic and evolution of antifreeze proteins, this book represents a unique, comprehensive work and a must-have for students and scientists in biochemistry, molecular biology, biotechnology and physical chemistry.

Dr. Hans Ramløv is professor of Comparative Animal Physiology at Roskilde University, Denmark. For the last 35 years he has investigated physiological adaptations to extreme environments in ectothermic animals with special emphasis on cold and drought. The research includes investigations on cryptobiosis in tardigrades, freeze tolerance in insects and vertebrates and since the early 1990’es various aspects of the properties of antifreeze proteins. Together with researchers from Norway and Denmark he has determined the structure of antifreeze proteins from the bark beetles Rhagium inquisitor and Rhagium mordax as well as the cloning and expression of these proteins into Escherichia coli. Via international collaboration this research has led to a suggested model for the molecular interaction of the R. mordax antifreeze protein with ice. Hans Ramløv has worked in extreme environments across the globe, from the Sahara via alpine areas in Europe and New Zealand to the Antarctic, Greenland and the north polar basin.

Dr. Dennis Steven Friis has a PhD within the field of protein chemistry, and is currently working in the pharmaceutical industry in Copenhagen. He has done both his masters and PhD on antifreeze protein research in collaboration with Hans Ramløv. The master’s thesis focused on cryopreservation of kidney cells in suspension, investigating the Rhagium mordax antifreeze proteins’ potential as a cryoprotective agent as well as freeze injuries in general. During the PhD he worked firstly on developing an efficient method to express, extract and purify recombinant antifreeze proteins using E. coli as the host organism. Hereafter, he investigated the physicochemical properties of the antifreeze protein, as well as creating various mutants of the protein and examining their effects on the hysteresis activity.After six years in collaboration with Hans Ramløv on the research on antifreeze proteins, he switched his career into the pharmaceutical industry, however, not before seizing the opportunity of being co-editor this book on the fascinating topic of antifreeze proteins.