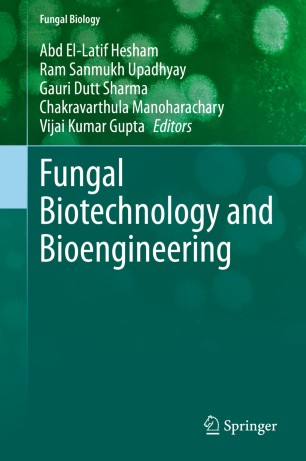 Fungi are eukaryotic microorganisms that include both unicellular and multicellular species. They have a worldwide distribution and a wide range of applications in diverse sectors, from environmental, food and medicine to biotechnological innovations. Fungal biochemical genetics involves the study of the relationships between genome, proteome and metabolome, and the underlying molecular processes in both native and bioengineered fungi.

This book provides a valuable resource on the challenges and potential of fungal biotechnology and related bioengineering and functional diversity for various industrial applications in the food, environmental, bioenergy and biorefining, and the biopharma sectors. In comparison to previous and related publications in the area of applied myco-biotech-engineering, this book bridges a knowledge gap in the areas related to prospects and investment as well as intellectual and technical issues. This book also provides information on recent commercial and economic interests in the area by juxtaposing the developments achieved in recent worldwide research and its many challenges.

Before joining BSU he worked at Assiut University since his graduation in 1992 to July 2019 as a demonstrator, lecturer, assistant professor, associate professor and then full professor. He also worked as associate professor of microbial genetics and biotechnology for five years in the Department of Biology, Faculty of Science, King Khalid University, Saudi Arabia.

He is one of the leading experts in the area of “Microbial Genetics & Biotechnology”, “Biodegradation, Bioremediation & Phytoremediation”, " Microbial community structure, “Soil Microbiology and Enzyme activities”, “Biological Control”, “Anti-microbial activates”, “Biofertilizer”, “Biofuels” and "Environmental Meta-Genome Biotechnology".  He has co-authored more than 80 peer-reviewed publications in reputed Thomson Reuters impact factor journals and 4 book chapters in international reputed publishers like Elsevier, Springer-Nature, Taylor & Francis and John Wiley & Sons. He is key person in many national and international research projects related to field of Microbial Genetics and applied biotechnology.

Prof. Hesham has been the scientific & organizing committee member and invited speaker in various international conferences. He is also a recipient of several prestigious national and international awards including most recently he has been elected as member of the Egyptian National Biotechnology Network of Expertise (NBNE); and Has been appointed as the Country Representative for Egypt and the Arab Counties by International Biodeterioration & Biodegradation Society (IBBS) UK, which belongs to the Federation of European Microbiological Societies (FEMS).

He is also Fellow of Microbiology Society, UK; European Federation of Biotechnology, Spain; The Bio-Processing Network, Australia; and The International Biodeterioration & Biodegradation Society.

Prof. Hesham serves as an associate editor and editorial board member for international reputed journals such as, Scientific Reports; Frontiers in Microbiology; Frontiers in Plant Science; PeerJ; Current Bioinformatics; International Journal of Agriculture & Biology; Journal of Environmental Biology and Biocatalysis and Agricultural Biotechnology.

Professor Ram Sanmukh Upadhyay is a Professor and Head of Botany Department at the most prestigious University of India, Banaras Hindu University (BHU). He is credited with the discovery of the perfect state of Fusarium udum, the causal agent of the wilt of pigeon pea. He is also acclaimed for his contributions to the biology of this pathogen. He has published 143 research papers, 60 Book Chapters, 03 edited Books and 01 Monographs of national and international repute. He has produced 27 Ph.D. students ranging on the topics such as biological control of plant pathogens, programmed plant cell death in response to pathogens, bioremediation of toxic effluents, induced resistance in plants and their immunization, plant growth promoting microbes, chitinase production from actinomycetes, mycorrhizal technology for reclamation of wastelands, role rhizobacteria in detoxifying phytotoxic effect, development of molecular markers in tracking microbes in environment and effect of biotic and abiotic factors on plants, molecular basis of plant- microbe interaction. Six Ph. D. students are currently working under his supervision. He has supervised more than 60 MS/MD level dissertations. His current research interest focuses mainly on biological control of fungal plant pathogens, induced resistance in plants against pathogens, and microbial technology. He is a member of various scientific societies and is on the editorial board of various journals. Dr. Upadhyay is a recipient of the prestigious Young Scientist Award of the Indian National Science Academy (INSA), Professor L. S. S. Kumar Memorial Award of INSA. He was conferred by the Prime Minister of India with Prof. Hira Lal Chakravorty award of the Indian Science Congress Association in 1986. He has carried out collaborative research at Rothamsted Experimental Station (England; 1988-89) with Dr. David Hornby as visiting Fellow of the Royal Society of London., Illinois State University (USA; 1990-91) with Prof. R. K. Jayaswal, Distinguished Professor, and an INSA-JSPS Fellow (Japan; 1994-95) with Prof. Hajimu Komada at Shimane University. Dr. Upadhyay was the Coordinator of Environmental Science Program of BHU and currently he is the Programme Coordinator of the Centre of Advanced Study in Botany, Banaras Hindu University. He was the Convener of the Mycology and Plant Pathology Group of the CAS in Botany at BHU. His biography has been published by various biographical publishing houses including World Who’s Who.

Prof. Gauri Dutt Sharma is the Vice-Chancellor of Bilaspur University, Bilaspur, India. Prof. Sharma has been the Vice-Chancellor of Nagaland Vishwavidyalaya. He was also the Professor & Dean, School of Life Science and Pro-vice Chancellor, Assam Vishwavidyalaya. Prof. Sharma has done Master's Degree in Botany and PhD. in Ecology of Mycorrhiza. He is expert in Microbial Ecology and Microbiology Technology. Prof. Sharma is the Chairman of several Quality of higher education committee by NAAC, Banglore. He is the Fellow of Indian Mycological Society (FIMS), Indian Botanical Society (FBS) and International Natural Resource and Envi. Soc. (FINRES). He has got several awards in his career including Dr. Narsimhan Medal award by Indian Phytopathol. Soc., Rashtriya Ratna Award, International Study Center, DEED Award by Confederation of Indian Univs, IAEWA, UNESCO, Birbal Sahni Award by Indian Bot. Soc., and Education Excellency Award by CCLP Worldwide. He is the editorial member of various journals of international and national repute. His ResearchGate score is 35.04. He has 297 research/review publications along with 11 edited books published from publishers of international repute like CABI, UK; CRC Press, Taylor and Francis in his hands.

Prof. C. Manoharachary has served Osmania University for 45 long years in different capacities including as Dean. He has served as Vice Chancellor of Oriental University, Indore. He has guided 50 students for Ph.d., published 640 research papers and 30 books including that of Springer Publications, USA. He has discovered 20 new fungal genera and 82 new fungal species. He has immensely contributed for the advancement of teaching and research in Mycology and Plant pathology besides establishing excellent infrastructure. He is recipient of Five National Awards including Dr. E. K. Janaki Ammal National Award by the Ministry of Environment and UGC J.C. Bose Award. Further, received five awards from state government including best teacher award and outstanding scientist award. he has been honoured with six lifetime achievement awards, served as president of IPS, IBS, MSI, ISCA Botany section and others. Served as chairman/expert member of UGC,  DST, DBT, MOENF, ICAR, CSIR and others. He did his postdoctoral work in UK, USA, and Germany. He is also fellow of National Academy of Sciences, India, Fellow of National Academy of Agricultural Sciences, and others.

Before joining EMU, he worked as Senior Research Scientist, in prestigious ERA Chair of Green Chemistry, Tallinn University of Technology (TalTech), Tallinn, Estonia for 3 years and as Senior Researcher for 6+years at Molecular Glycobiotechnology Group (MGBG) at Department of Biochemistry, National University of Ireland Galway (NUIG), Ireland.  He worked as Assistant Professor of Biotechnology at MITS University, India before moving to NUIG Ireland.

He is one of the leading experts in the area of- Bioactive Natural Products, Microbial Biotechnology and Applied Mycology, Enzyme and Bioprocess Technology, Biofuel & Biorefinery Research, Glycobiotechnology of Plant-Microbial Interactions.

He is the Secretary of European Mycological Association, Country Ambassador of American Society of Microbiology. He has received several international awards. He is the editor of few well-reputed Thomson Reuters impact factor journals and edited 28 books, for internationally reputed publishers like Elsevier press, Wiley-Blackwell, Frontiers, Taylor and Francis, Springer-Nature, CABI and De Gruyter. Also, his author h-index is 34 and he has 122 his hands in internationally well-reputed journals. He has also developed 02 IPs in the area of microbial biotechnology/sustainable product developments.