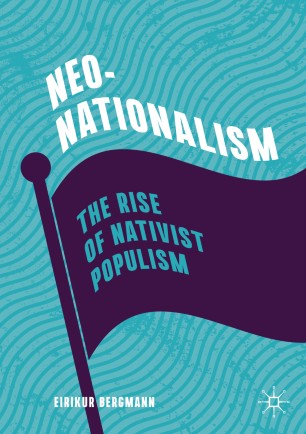 The Rise of Nativist Populism

‘Our current politics is plagued by the disturbing reemergence of nationalism, populism, and extremism. Many countries have turned away from democracy in favor of authoritarianism. Eirikur Bergmann carefully examines these illiberal trends from across Europe and the US to explain how democracy is failing and why. This is a must-read for any student of modern political history.’

‘This latest study by Eirikur Bergmann provides an encyclopaedic, accessible, page-turning global survey of the rise of nationalist populism. This is likely to become the definitive introduction to the subject.’

–David Farrell, Professor of Politics, University College Dublin, Ireland
This book maps three waves of nativist populism in the post-war era, emerging into contemporary Neo-Nationalism. The first wave rose in the wake of the Oil Crisis in 1972. The second was ignited by the Collapse of Communism in 1989, spiking with the 9/11 terrorist attacks. The third began to emerge after the Financial Crisis of 2008, soaring with the Refugee Crisis of 2015. The book traces a move away from liberal democracy and towards renewed authoritative tendencies on both sides of the Atlantic. It follows the mainstreaming of formerly discredited and marginalized politics, gradually becoming a new normal. By identifying common qualities of Neo-Nationalism, the book frames a threefold claim of nativist populists in protecting the people: discursively creating an external threat, pointing to domestic traitors, and positioning themselves as the true defenders of the nation.
Eirikur Bergmann is Professor of Politics at Bifrost University, Iceland, and Director of its Centre for European Studies. He is author of nine academic books, and three novels. He is a frequent commentator in media on politics and European affairs.

Eirikur Bergmann is Professor of Politics at Bifrost University, Iceland, and Director of its Centre for European Studies. He is author of nine academic books, and three novels. He is a frequent commentator in media on politics and European affairs.

“Bergmann’s book is highly recommended, and provides an informed narrative to understand the trends underlying the rise of the radical right in its nativist and populist variety. This is an important book for sound orientation and reference, useful for journalists, students and a general readership alike.” (Andreas Önnerfors, radicalrightanalysis.com, November 20, 2020)

“This is an interesting and timely book. It provides a succinct and persuasive overview of the development of ‘neo-nationalism’ since the early 1970s.” (Jeffrey Haynes, Democratization, August 25, 2020)

“Bergmann’s book provides a concise overview of neo-nationalism. … this book is an important contribution to the mapping of populist parties in connection with neo-nationalism and, thus, triggers further research on its transformations. It is also valuable for the identification of the trajectories of the most influential nationalist parties over the last 70 years. It is finally a useful tool for anyone who wants to find sources and information for more research on the area of nativism.” (Dimitra Mareta, eExtreme, Vol. 21 (3), 2020)