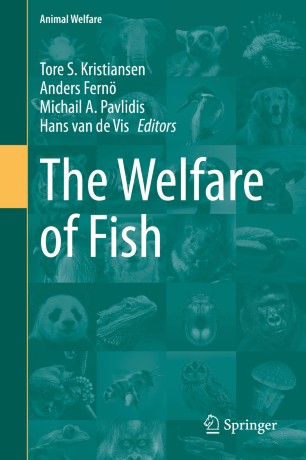 The Welfare of Fish

This book investigates how fish experience their lives, their amazing senses and abilities, and how human actions impact their quality of life. The authors examine the concept of fish welfare and the scientific knowledge behind the inclusion of fish within the moral circle, and how this knowledge can change the way we treat fish in the future. In many countries fish are already protected by animal welfare legislation in the same way as mammals, but in practice there is still a major gap between how we ethically view these groups and how we actually treat them. The poor treatment of fish represents a massive animal welfare problem in aquaculture and fisheries, both in terms of the number of animals affected and the severity of the welfare issues.

Thanks to its interdisciplinary scope, this thought-provoking book appeals to professionals, academics and students in the fields of animal welfare, cognition and physiology, as well as fisheries and aquaculture management.

Tore S. Kristiansen is an experienced leader at the Animal Welfare research group, Institute of Marine Research (IMR) in Bergen, Norway, and also heads the Norwegian National Committee for the Protection of Animals Used for Scientific Purposes. He completed his Master’s and PhD in Fisheries Biology at the University of Bergen, Norway and subsequently became a researcher at the IMR, where he has focused on fish welfare research ever since. Having served as a project leader and coordinator of several national and European research projects concerning fish welfare, his expertise covers a broad range of areas, including population dynamics, stock enhancement, and juvenile production of Atlantic cod and lobster; behavior, cognition and learning ability of cod, halibut, and salmon; stress- and neurobiology, and the welfare of farmed fish.

Anders Fernö is a Professor Emeritus at the Department of Biological Sciences at the University of Bergen, Norway. He started his academic studies at the University of Lund, Sweden and completed his PhD at the University of Stockholm, Sweden. He became an Assistant Professor and later Professor at the University of Bergen and was also Adjunct Chief Scientist at the Institute of Marine Research in Bergen. His research focuses on the behavior of marine and freshwater fish. His expertise covers a broad field including ontogeny and learning, spatio-temporal dynamics and schooling dynamics, with applications in the distribution of commercial fish species, fish capture, aquaculture, sea ranching, and welfare. Fernö has been member of the editorial board of Applied Animal Behaviour Science.

Michalis A. Pavlidis is a Professor at the Department of Biology, University of Crete, Greece. He received his M.Sc in Public Health from the School of Public Health and Hygiene, Athens and his PhD in Biology from the University of Athens, Greece. His fields of specialization include reproductive biology, pigmentation physiology, stress and welfare of cultured fish species and zebrafish. Dr. Pavlidis has participated in several R&D projects and networks and he has published numerous scientific papers on fish physiology and aquaculture. He was a member of the EFSA working group for the assessment of welfare of European sea bass and gilthead sea bream. He is a member of the Standing Committee on Agricultural Research (SCAR) - Fish Strategic Working Group. He coordinates the Erasmus Plus Joint Master’s Degree in “Aquaculture, Environment and Society” and the summer course “Care and Use of Laboratory Animals: Mice, Rats and Zebrafish”.

Hans van de Vis is a senior researcher at the Department of Animal Health and Welfare, Wageningen Livestock Research, the Netherlands. He received his M.Sc in Biochemistry from Utrecht University, the Netherlands and his PhD in Agricultural Sciences at Wageningen University, the Netherlands. His fields of specialization include stress and welfare of cultured and captured fish species. Dr. Van de Vis has participated in several R&D projects and networks and he has published numerous scientific papers on fish welfare. He was a member of the EFSA working group for the assessment of welfare during farming of European eel and welfare at slaughter of European eel, sea bass and gilthead sea bream. He is a member of Wageningen Institute of Animal Sciences, Wageningen, the Netherlands.

“This text is directed toward professionals, academics, and students in animal welfare, cognition, and physiology, as well as fisheries and aquaculture management. It does well to adapt across these audiences, providing graphics to support the text, which bridges the gaps between these fields. ... this text is sure to serve as an important reference and stepping point to challenge past concepts of ‘acceptable’ fish welfare and move this field forward into more humane, ethical, and purposeful management practices.” (Samantha Sander, Doody’s Book Reviews, January 30, 2021)
Buy options