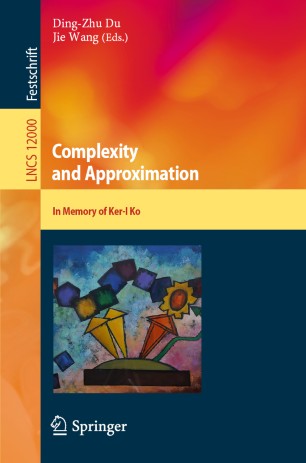 In Memory of Ker-I Ko

This Festschrift is in honor of Ker-I Ko, Professor in the Stony Brook University, USA. Ker-I Ko was one of the founding fathers of computational complexity over real numbers and analysis. He and Harvey Friedman devised a theoretical model for real number computations by extending the computation of Turing machines. He contributed signiﬁcantly to advancing the theory of structural complexity, especially on polynomial-time isomorphism, instance complexity, and relativization of polynomial-time hierarchy. Ker-I also made many contributions to approximation algorithm theory of combinatorial optimization problems. This volume contains 17 contributions in the area of complexity and approximation. Those articles are authored by researchers over the world, including North America, Europe and Asia. Most of them are co-authors, colleagues, friends, and students of Ker-I Ko.