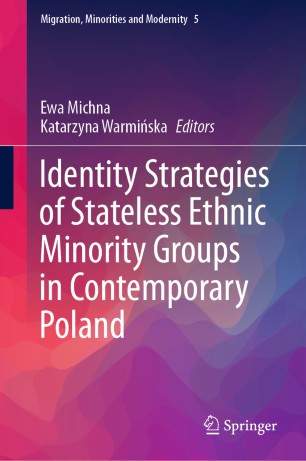 This book provides a unique description of the identity strategies of stateless ethnic minorities in Poland. It describes and analyses the identity politics carried out by these groups, aimed at obtaining recognition of a separate status from the Polish state (a dominant group) in the symbolic and legal realms. On the one hand, comparative analysis of the activity undertaken by Lemkos, Polish Tatars, Roma, Kashubians, Karaims and Silesians will allow us to present the specifics of each of the communities, resulting from the special nature of their ethnicity. On the other hand, it will show some typical strategies for stateless groups in the field of identity and ethnicity. Critical factors here are processes such as building ethnic borders, dealing with a non-privileged position, striving to achieve recognition for the status quo of a particular identity or politicization of ethnicity. The subjects are mostly indigenous groups, and the lack of legitimacy of emancipation in their own nation-state can determine their status as an ‘in-between’ in the context of ethnic relations in Poland. In the analysis undertaken in the book of the activity of the ethnic groups there are three main contexts: intragroup, state policy and the global discourse of the rights of minorities. They determine the choice of identity strategy and adopted policy of identity. Not without significance is also the historical context, especially the political transformation in Poland after 1989, when Polish state policy towards ethnic minorities changed fundamentally - moving from the mono-national ideology of a socialist state to a pluralistic model of a democratic state. Gathering diverse examples in one volume will allow the reader to become familiar with the complex topic of ethnic relations in the world today, and especially in Central Europe, which is still in the process of change.

Ewa Michna PhD habil., sociologist working on issues of ethnicity and nationalism. Her research interests focus around ethnic and national minorities in Central and Eastern Europe, struggle of minority communities for their recognition and the identity politics of ethnic leaders. She has conducted fieldwork among Lemkos, Carpatho-Rusyns in Slovakia and Ukraine and Silesians. She published over forty peer-reviewed articles and two books: “Łemkowie. Grupa etniczna czy naród?”  (The Lemkos. An Ethnic Group or a  Nation?), 1995; „Kwestie etniczno-narodowościowe na pograniczu Słowiańszczyzny wschodniej i zachodniej. Ruch rusiński na Słowacji. Ukrainie i w Polsce” (Ethnic and  National  Issues in the Borderlands of Eastern and Western Slavic World. The Rusyn Movement in Slovakia, Ukraine and Poland”), 2004. She is an associated professor at the Institute of American Studies and Polish Diaspora, Jagiellonian University, Krakow.

Katarzyna Warmińska, PhD habil., is an sociologist working on ethnic and identity issues. Her main interests concentrate on ethnic identity, politics of identity, minority – majority  relations and  anthropological practice. She has conducted fieldwork among Polish Tartars and Kashubians and has published research results in over fifty  peer-reviewed articles and in her book  “Tatarzy polscy. Tożsamość religijna i etniczna” (Polish Tartars. Religious and ethnic identity), 1999. She has also co-edited tree books. She is a professor associated with  the  Department of Sociology at Cracow University of Economics.