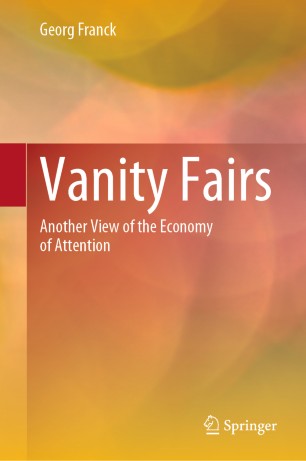 Another View of the Economy of Attention

This book offers readers a comprehensive introduction to the economy of attention from the perspective of the basic motive of the pursuit of attention: self-esteem. As a jumping-off point, it states the stark equation at the heart of this economy— that the  self-esteem one can afford depends on  one’s income of  appreciative attention. The information markets in which participants compete to play a role in the  consciousness of  others are described as ‘vanity fairs’. Since the  pursuit of self-esteem is highly effective when it comes to mobilizing human energies, vanity fairs are not just playgrounds of individual passions, but have been utilized by society since time immemorial as markets for particularly challenging demands.

Starting with an analysis of the interface that connects the social economy of attention with the intra-psychic economy of self-esteem, the book then examines two main cases in point: modern science and the post-modern media culture. On the one hand we have scientists working for a ‘wage of fame’, who invest their own attention into getting the attention of others. On the other, today’s dominant media have left the sale of information behind to focus solely on the attraction of attention, which is sold as a service to the advertising industry. In each case the use of attention as a means of payment is key to its phenomenal success. But success comes at a price: the dark side of this monetization of attention is a kind of  ’climate change’ in the collective mental sphere which threatens the very existence of our social fabric.

Georg Franck studied philosophy, economics and architecture and obtained his PhD in economics. In 1974 he became a practising architect and urban designer. In addition, he was active in software development, producing a planning information system which has been marketed since 1991. His theoretical interests asserted themselves against the hustle and bustle of the start-up scene. His work on philosophy and economic theory, rather, merged into the concept of the economy of attention, which he introduced in 1993. Continuing his parallel interests, he changed track from business to academia. From 1994 – 2015 he held the Chair of Digital Methods in Architecture and Planning at the Vienna University of Technology, Austria, where his research focused on the economy of attention within the field of science, on the constituents of architectural quality, on algorithmic support of creative design, on the modelling of the city as a process, and the concept of an ‘urban commons’ as a reorganization of urban design according to the principles of peer-to-peer and open source. In 2004 he was appointed to teach attention economy, consciousness studies and philosophy of time as general education subjects at his university.