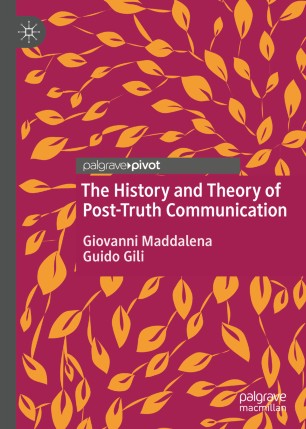 The History and Theory of Post-Truth Communication

This book traces the principal roots of the concept of post-truth to uncover how it came by its present meaning. The concept of post-truth is the ripe and poisonous fruit of a tree fertilized and watered by many gardeners: some with good intentions, some with bad intentions, and others without a full understanding of the consequences of their thoughts and actions. If the concepts behind the expression ‘post-truth’ have a long history, what is behind the current rise in interest and alarm about the concept? Chosen by the Oxford English Dictionary as ‘word of the year’ in 2016, post-truth has entered both journalistic and common languages. There is, however, much confusion and a suffocating rhetoric about what it is, how it became such a powerful force, and its positive or perverse effects. Offering a fast-paced discussion of philosophical concepts, sociological theories, communication strategies, and original interpretations of historical events from the birth of mass media until today, this book is a guide for those who want to understand what is going on in Western society and culture.

Giovanni Maddalena is Professor of the History of Philosophy at the University of Molise, Italy. He is a Fulbright Research Scholar (2010) and Professeur Invité de l’École Normale Supérieure (2015). He is also Editor of European Journal of Pragmatism and American Philosophy and Founder of the Vasily Grossman Study Center.

Guido Gili is Professor of Communication and Media Sociology and Vice Rector at the University of Molise, Italy. His research focuses on credibility, manipulation, post-truth, theories of mass society, public sphere transformations, and the ecology of media. He is the President of the Italian Scientific Society of Sociology, Culture, and Communication.