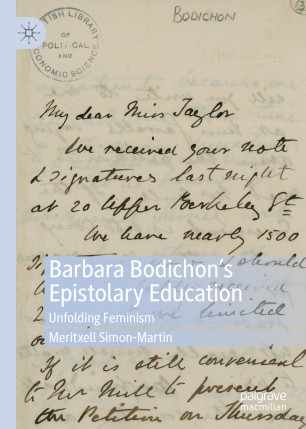 This book assesses Barbara Bodichon’s significance in the history of the women’s movement in Britain by elaborating a conceptualisation of letters as sources of feminist development. Bodichon was the leader of the first women’s suffrage committee in England, which collected 1,500 signatures in favour of the female vote – a petition presented in the House of Commons by sympathising MPs to support the amendment of the 1867 Reform Bill. This book explores the significance of letter-exchange in Barbara Bodichon’s feminist becoming as she managed to mobilize partisans and secure signatures by means of chains of friendship letters spreading across the country. For letters functioned as platforms where, concomitantly to her making sense of her experiential input, Bodichon adopted, redefined and challenged circulating discourses – transforming them in the process and hence contributing to the production of feminist knowledge, intersubjectively and collaboratively in dialogue with her
addressees. At the crossroads of history of feminism, gender history and history of women’s education, this book explores the significance of letter-exchange in Bodichon’s development into one of the galvanizing figures of the women’s rights movement in Victorian England.

Meritxell Simon-Martin is Marie Curie Fellow in the Department of Humanities at Roehampton University, UK. Her areas of research interest lie at the crossroads of History of Education, Women’s and Gender History, Narrative Analysis and Epistolary Studies. She is co-editor of the History of Education Researcher and member of the editorial board of the European Journal of Life Writing.