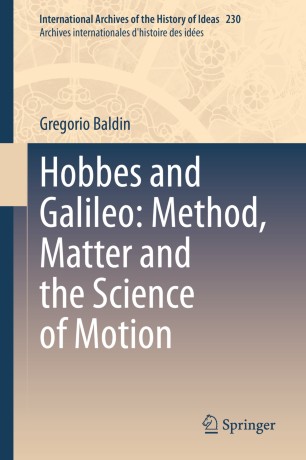 Hobbes and Galileo: Method, Matter and the Science of Motion

This book, translated from Italian, discusses the influence of Galileo on Hobbes’ natural philosophy. In his De motu, loco et tempore or Anti-White (~ 1643), Thomas Hobbes describes Galileo as “the greatest philosopher of all times”, and in De Corpore (1655), the Italian scientist is presented as the one who “opened the door of all physics, that is, the nature of motion.”  The book gives a detailed analysis of Galileo’s legacy in Hobbes’s philosophy, exploring four main issues: a comparison between Hobbes’ and Mersenne’s natural philosophies, the Galilean Principles of Hobbes’ philosophical system, a comparison between Galileo’s momentum and Hobbes’s conatus , and Hobbes’ and Galileo’s theories of matter. The book also analyses the role played by Marin Mersenne, in spreading Galileo’s ideas in France, and as a discussant of Hobbes. It highlights the many aspects of Hobbes’ relationship with Galileo: the methodological and epistemological elements, but also the conceptual and the lexical analogies in the field of physics, to arrive, finally, at a close comparison on the subject of the matter. From this analysis emerges a shared mechanical conception of the universe open and infinite, that replaces the Aristotelian cosmos, and which is populated by two elements only: matter and motion.

“Baldin’s work represents a milestone in the research of the historical dependencies between Hobbes and the cultural milieu from which his philosophical and scientific views stemmed, and the author deserves merit for composing such an interesting and exhaustive investigation.” (Federico Pierucci, Nuncius, Vol. 35, 2020)