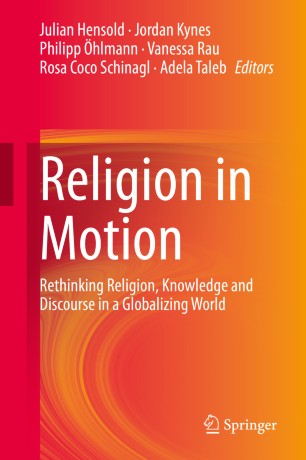 Rethinking Religion, Knowledge and Discourse in a Globalizing World

This volume explores the context-specific formations of religion and religious knowledge production in an increasingly unstable and incalculable globalized world.

In the spirit of the challenging slogan, “Religion in Motion. Rethinking Religion, Knowledge and Discourse in a Globalizing World,” the book bundles voices from a great variety of cultural and academic backgrounds. It offers readers a cross-continental exchange of innovative approaches in the study of religion. Coverage intersects religion, gender, economics, and politics. In addition, it de-centers European perspectives and brings in perspectives from the Global South.

Chapters examine such topics as feminine power and agency in the Ilê Axé Oxum Abalô, queering the Trinity, and faith and professionalism in humanitarian encounters in post-earthquake Haiti. Coverage also explores notions of development in African initiated churches and their implications for development policy, the study of religion as the study of discourse construction, rethinking the religion/secularism binary in world politics, and more. This book will appeal to students and researchers with an interest in Religion and Society, Philosophy and Religion, and Religion and Gender.

Julian Hensold is a PhD candidate at the Theological Faculty of Humboldt-Universität zu Berlin. He studied Protestant Theology, Philosophy and Religious Studies at Humboldt-Universität zu Berlin, Ruprecht-Karls-Universität in Heidelberg and Yale University in New Haven. In 2013 Julian completed his studies with the 1.Theol. Examen at ELKB (Evangelical Lutheran Church in Bavaria). His research interests include theories about religion, classical and contemporary concepts of subjectivity and subjectivation, theories of cultural practice and performativity, post-Kantian Idealist philosophies of religion (mainly Hegel and late Natorp), liberal theological thought as well as practical-theological questions concerning an actualization of Christian religious practice in the 21th century. In his dissertation project Julian focuses on a problem-oriented re-explication of Hegel’s philosophy of religion concerned with the question of how to adequately understand and justify religious practice in a (late-)modern setting of subjectivation.
Jordan Kynes is a doctoral candidate in Philosophy at the Humboldt-Universität zu Berlin and holds an M.A. in Religion and Culture from the same university. His main areas of interest are the History of Ideas and Sociology of Knowledge, with a special focus on language and translation in the construction of memory, identity, and orientation. His dissertation takes the early works of Moroccan philosopher Mohammed 'Abed al-Jabri as a means of exploring al-Jabri's development of an epistemologically-predicated notion of Arab modernity and its function as a contestation of the prevailing ideological narratives (both internal and external) in the context of Moroccan independence.
Philipp Öhlmann heads the Research Programme on Religious Communities and Sustainable Development at Humboldt-Universität zu Berlin and is a research associate at University of Pretoria. His research focuses on the effects of religion on economic performance as well as African Christianity and sustainable development. Öhlmann’s publications include “Religiosity and household income in Sekhukhune” (with Silke Hüttel), Development Southern Africa (2018) and “African Initiated Churches' potential as development actors” (with Marie-Luise Frost and Wilhelm Gräb), HTS Theological Studies(2016), and the edited volume African Initiated Christianity and the Decolonisation of Development. Sustainable Development in Pentecostal and Independent Churches (with Marie-Luise Frost and Wilhelm Gräb 2020).
Dr. Vanessa Rau is a post-doctoral research fellow at the Max-Planck-Institute for the study of Religious and Ethnic Diversity and part of the ZOMiDi project, “Civil Society Organizations and the Challenges of Migration and Diversity: Agents of Change” in the sub-section “Disability and Sexual Minorities”. She holds a PhD in Sociology from the University of Cambridge. Her thesis entitled “Contesting the Secular and Converting Space in Berlin? Becoming Jewish in an Urban Scene” examines a newly emerging Jewish-Hebrew scene in Berlin and investigates how religious and secular belonging are negotiated under specific discursive representations. The study combines ethnography with biographical-narrative research and looks at trajectories of migration and conversion and their entanglements with gender, sexuality, religion and aesthetic practices (particularly music). Vanessa holds a BA in Social and Political Science (University of Cambridge) and an M.A. in International Relations and Social Science (Free University and Humboldt-Universität zu Berlin) with a focus on religious and cultural studies, the politics of religion and secularism and qualitative research.
Rosa Coco Schinagl is a Humboldt Graduate Scholar (Programm: Religion – Knowledge – Discourses) and PhD candidate in the Department of Systematic Theology whose doctoral research is concerned with Hannah Arendt’s early work Der Liebesbegriff bei Augustin. Versuch einer philosophischen Interpretation (Love and Saint Augustine). She is trained in Protestant Theology in Germany (BA) and South Africa, holding an MPhil (with distinction) in Religion and Culture from the Theology Department of Stellenbosch University, South Africa. Her research interests include Systematic Theology, Practical Theology, Missiology, Ancient and Modern Philosophy and Interreligious Dialogue in Modernity.
Adela Taleb is a PhD candidate at the Institute of European Ethnology at Humboldt-Universität zu Berlin. In her research project she investigates the formation of “EUropean Islam” from a discourse analytical approach, looking at the interaction of Eurocrats and NGOs in the arena of the European Union. Her research interests include critical and postcolonial theory, visual studies, anthropology of policy and ethnography of the political. Adela was a visiting researcher at the Law and Anthropology department of Max-Planck-Institute for Social Anthropology in Halle, the European Institute of the London School of Economics and Political Science, as well as the Interculturalism, Migration and Minorities Research Centre of KU Leuven. She holds an M.A. in Near and Middle Eastern Studies from the School of Oriental and African Studies, University of London and has published on themes such as “visual Orientalism”, the politics of representing “the Muslim Woman”, and “European Islam”.