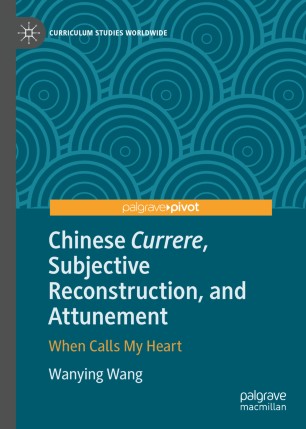 When Calls My Heart

This book proposes a new way of understanding the concept of currere, first described by William Pinar, as an approach to curriculum studies. Derived from her subject position as a Chinese woman who has studied in Beijing and Hong Kong and now researches in Vancouver, the author sets out to contribute to the distinctiveness of a Chinese cosmopolitan theory of curriculum as experienced: the initial formulation of a Chinese currere. Juxtaposing currere with elements of ancient Chinese philosophical thought to inform a cosmopolitan concept of spirituality, chapters articulate the author's own journey through subjective reconstruction, shedding light on how her subjectivity has been reconstructed through autobiography and academic study toward a coherent self capable of sustained, critical, and creative engagement with the world.

Wanying Wang is Postdoctoral Fellow at the University of British Columbia, Canada. She holds PhDs in both Curriculum Studies and Curriculum Innovation and Higher Education. She has previously published books and papers on currere, autobiography, cosmopolitanism, curriculum change, educational leadership, general education, and Chinese higher education.

"In her landmark study, Dr. Wang associates currere with elements of ancient Chinese philosophical thought. In so doing she testifies to what she characterizes as a cosmopolitan concept of spirituality, an ennobling abstraction that is an animating even structuring cause (and consequence) of her own subjective reconstruction, a process (as she so superbly explains) focused through attunement. There is in this remarkable study a reverberating juxtaposition of concepts from West and East, a juxtaposition that carves an unfathomable space between them, providing a portal for a new and original conception:  a Chinese currere. No identity politics here, however. Instead we enter a subjective space in-between East and West, an affirmation of our humanity underneath identity and politics, embracing each as intertwined and embodied by the singular individual, the human person. As Wang so poetically puts it, 'It is as if the whole world unfolds through seeking to understand oneself.' Exactly."
—William Pinar, Tetsuo Aoki Professor, University of British Columbia, Canada
Buy options