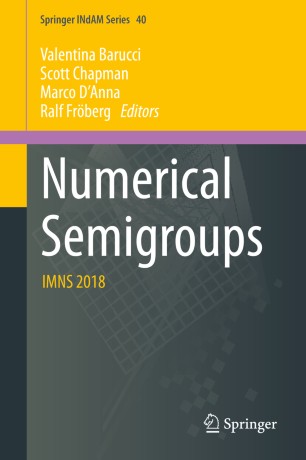 This book presents the state of the art on numerical semigroups and related subjects, offering different perspectives on research in the field and including results and examples that are very difficult to find in a structured exposition elsewhere. The contents comprise the proceedings of the 2018 INdAM “International Meeting on Numerical Semigroups”, held in Cortona, Italy. Talks at the meeting centered not only on traditional types of numerical semigroups, such as Arf or symmetric, and their usual properties, but also on related types of semigroups, such as affine, Puiseux, Weierstrass, and primary, and their applications in other branches of algebra, including semigroup rings, coding theory, star operations, and Hilbert functions. The papers in the book reflect the variety of the talks and derive from research areas including Semigroup Theory, Factorization Theory, Algebraic Geometry, Combinatorics, Commutative Algebra, Coding Theory, and Number Theory. The book is intended for researchers and students who want to learn about recent developments in the theory of numerical semigroups and its connections with other research fields.

Valentina Barucci has been Full Professor of Algebra in the Department of Mathematics at Sapienza University of Rome. She has been a referee for various journals and from 1993 to 2010 was the head of a number of research projects in Commutative Algebra and Algebraic Geometry, funded by Sapienza University. She has published more than 50 research papers in national and international journals.

Scott Chapman is a Texas State University System Regents' Professor and SHSU Distinguished Professor in the Department of Mathematics and Statistics at Sam Houston State University in Huntsville, Texas. In December of 2016 he finished a five-year appointment as Editor of the American Mathematical Monthly. His editorial work, numerous publications in the area of non-unique factorizations, and years of directing REU Programs led to his designation in 2017 as a Fellow of the American Mathematical Society.

Marco D’Anna obtained his PhD from the Sapienza University of Rome in 1997 and became an Associate Professor at Catania University in 2001, where he has been the supervisor for many PhD and Master’s students. He has produced numerous research papers on Commutative Algebra, many of them on one-dimensional rings and numerical semigroup rings.

Ralf Fröberg obtained his PhD from the University of Stockholm, Sweden, in 1977, where he became a Full Professor in 1999. His research interests have been commutative and homological algebra. Alone and with coauthors, he has written many articles about numerical semigroups and semigroup rings, but also about Hilbert series, Stanley-Reisner rings, Koszul algebras, and resolutions.