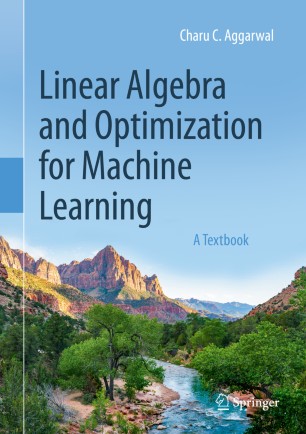 This textbook introduces linear algebra and optimization in the context of machine learning. Examples and exercises are provided throughout the book. A solution manual for the exercises at the end of each chapter is available to teaching instructors. This textbook targets graduate level students and professors in computer science, mathematics and data science. Advanced undergraduate students can also use this textbook. The chapters for this textbook are organized as follows:

2. Optimization and its applications: Much of machine learning is posed as an optimization problem in which we try to maximize the accuracy of regression and classification models. The “parent problem” of optimization-centric machine learning is least-squares regression. Interestingly, this problem arises in both linear algebra and optimization, and is one of the key connecting problems of the two fields.  Least-squares regression is also the starting point for support vector machines, logistic regression, and recommender systems. Furthermore, the methods for dimensionality reduction and matrix factorization also require the development of optimization methods. A general view of optimization in computational graphs is discussed together with its applications to back propagation in neural networks.

Charu C. Aggarwal is a Distinguished Research Staff Member (DRSM) at the IBM T. J. Watson Research Center in Yorktown Heights, New York. He completed his undergraduate degree in Computer Science from the Indian Institute of Technology at Kanpur in 1993 and his Ph.D. in Operations Research from the Massachusetts Institute of Technology in 1996. He has published more than 400 papers in refereed conferences and journals and has applied for or been granted more than 80 patents. He is author or editor of 19 books, including textbooks on data mining, neural networks, machine learning (for text), recommender systems, and outlier analysis. Because of the commercial value of his patents, he has thrice been designated a Master Inventor at IBM. He has received several internal and external awards, including the EDBT Test-of-Time Award (2014), the IEEE ICDM Research Contributions Award (2015), and the ACM SIGKDD Innovation Award (2019). He has served as editor-in-chief of the ACM SIGKDD Explorations, and is currently serving as an editor-in-chief of the ACM Transactions on Knowledge Discovery from Data. He is a fellow of the SIAM, ACM, and the IEEE, for “contributions to knowledge discovery and data mining algorithms.”

“Based on the topics covered and the excellent presentation, I would recommend Aggarwal's book over these other books for an advanced undergraduate or beginning graduate course on mathematics for data science.” (Brian Borchers, MAA Reviews, March 28, 2021)

“This book should be of interest to graduate students in engineering, applied mathematics, and other fields requiring an understanding of the mathematical underpinnings of machine learning.” (IEEE Control Systems Magazine, Vol. 40 (6), December, 2020)