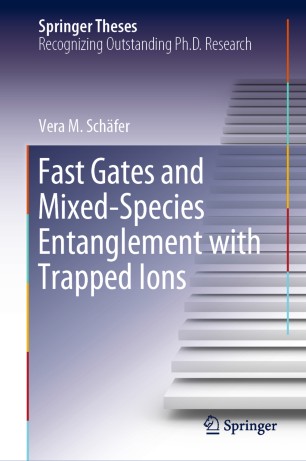 Quantum logic gates are the crucial information-processing operation of quantum computers. Two crucial performance metrics for logic gates are their precision and speed. Quantum processors based on trapped ions have always been the touchstone for gate precision, but have suffered from slow speed relative to other quantum logic platforms such as solid state systems. This thesis shows that it is possible to accelerate the logic "clock speed" from kHz to MHz speeds, whilst maintaining a precision of 99.8%. This is almost as high as the world record for conventional trapped-ion gates, but more than 20 times faster. It also demonstrates entanglement generation in a time (480ns) shorter than the natural timescale of the ions' motion in the trap, which starts to probe an interesting new regime of ion trap physics.
In separate experiments, some of the first "mixed-species" quantum logic gates are performed, both between two different elements, and between different isotopes. The mixed-isotope gate is used to make the first test of the quantum-mechanical Bell inequality between two different species of isolated atoms.