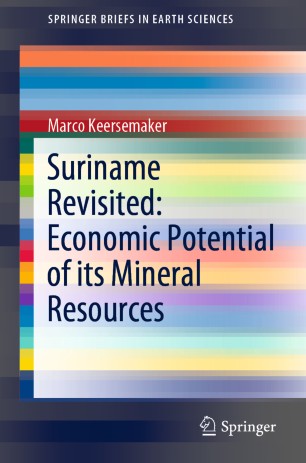 This book summarizes the exploration history and provides a framework for assessing the economic potential of the country’s minerals by defining minimal deposit parameters for the various commodities present. Suriname was explored extensively for mineral occurrences in the course of the previous century, indicating the presence of a range of commodities. The country mined and processed bauxite for a century (until 2016), and has an even longer history of small-scale alluvial gold mining; it is currently home to two major gold producers. However, exploration activities have been limited during the past 4 decades as most parts of Suriname’s interior are difficult to access, making geological fieldwork both difficult and expensive. Further, the markets and prices have changed in the interim, which calls for a fresh look at the historic data.

Marco Keersemaker MBA (1962) graduated from the Technical University of Delft with a degree in Mining Engineering in 1988. After a year working at an underground copper/gold mine in Australia, he joined Billiton and moved to Suriname, where he worked in bauxite mine operations. He obtained his MBA from Rotterdam University in 1994 and moved to Ghana, where he worked at gold mines for Ashanti (now AngloGold Ashanti). From 2000 to 2004, he worked at a Kenyan ruby quarry, a manganese mine in Ghana, and on a dredging project in Sri Lanka.
In 2004, Marco moved back to Suriname, where he spent five years with BHP Billiton as manager of the Lelydorp mine and mine manager for the Bakhuis project. Following the departure of BHP Billiton, he was transferred to Guinea in West Africa to work on bauxite and iron ore projects. When his employer pulled out of Guinea, Marco left the company and started his own consulting company, while also working as a lecturer at Delft University.