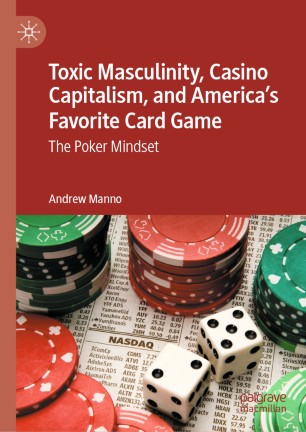 "Andrew Manno presents a rigorous and compelling case for the profound relationship between poker and contemporary culture. Toxic Masculinity, Casino Capitalism, and America’s Favorite Card Game: The Poker Mindset argues that the practices and attitudes rewarded in poker are being adopted more broadly with troubling results. Building on the work of researchers like Christopher Paul and Anastasia Salter and Bridget Blodgett, this book is a vital interrogation of poker as cultural form and an essential contribution to game studies."

“In the 1960s, the renowned sociologist Erving Goffman argued that casino gambling offered men an opportunity to break from the bureaucratized homogeneity of their daily routines and demonstrate character, courage, and composure in the face of risk. In Manno's troubling sequel to this story, the game of poker has risen to national prominence and serves as an arena in which anxious men working in a precarious economy can practice bullying, bluffing, and aggressive self-interest — the very values at stake in contemporary capitalism and the wider culture of toxic masculinity.”

Poker is a centuries-old American game. Why has it become so popular in the twenty-first century? What does current interest in the game tell us about ourselves and some of our most pressing social issues? In this timely and thought-provoking book, Andrew Manno offers important insights into the intersection of gaming, gender, and capitalism that illuminate how the shift to a casino capitalist economy—combined with a culture of toxic masculinity—impacts workers and how it has led to the rise of populism in the United States that manifested in the 2016 election of Donald Trump.

Andrew Manno, Ph.D. is a Professor of English at Raritan Valley Community College in New Jersey.

Andrew Manno, Ph.D. is a Professor of English at Raritan Valley Community College in New Jersey. He teaches courses in writing, Women’s and Gender Studies, and Men and Masculinities. His research focuses on masculinities and popular culture.