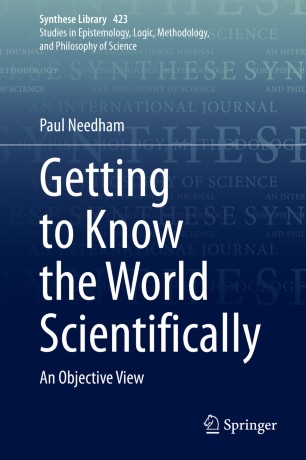 Getting to Know the World Scientifically

This undergraduate textbook introduces some fundamental issues in philosophy of science for students of philosophy and science students. The book is divided into two parts. Part 1 deals with knowledge and values. Chap. 1 presents the classical conception of knowledge as initiated by the ancient Greeks and elaborated during the development of science, introducing the central concepts of truth, belief and justification. Aspects of the quest for objectivity are taken up in the following two chapters. Moral issues are broached in Chap. 4, which discusses some aspects of the use and abuse of science, taking up the responsibilities of scientists in properly conducting their business and decision-makers in their concerns with the import of science for society. Part 2 contrasts the view of scientific progress as the rejecting of old hypotheses and theories and replacing them with new ones, represented by Karl Popper, with the conception of progress as accumulating knowledge, saving as much as possible from older theories, represented by Pierre Duhem. A concluding chapter defends the natural attitude of taking the theories of modern science to be literally true, i.e. realism, in the face of arguments drawn partly from the history of scientific progress in criticism of this stance.

Paul Needham is professor of theoretical philosophy at the University of Stockholm. He has a first degree in chemistry and a masters in philosophy, both from the University of Birmingham, and a doctorate in philosophy from the University of Uppsala. His interests include metaphysics, epistemology and the philosophy of science. He has previously worked on time and tense, causation and subjunctive conditionals. More recent interests are concerned with issues related to chemistry. This includes themes connected to the work of Pierre Duhem, particularly in connection with his role in the establishment of the field of physical chemistry, studies of the origins of the concept of chemical substance in the ancients and its development in more recent times, the discussion of natural kinds and criteria of sameness of substance in modern chemistry, and applications of mereology in the interpretation of macroscopic notions.