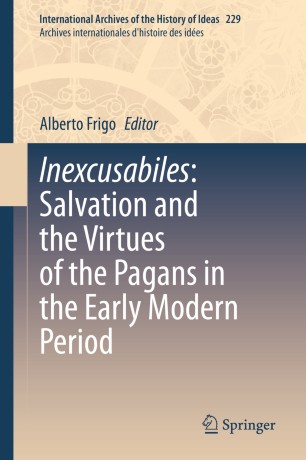 Inexcusabiles: Salvation and the Virtues of the Pagans in the Early Modern Period

This thought provoking book deals with religious scholarship and important controversies of the early modern period, specifically those relating to the question of the salvation of the pagans and the afterlife. From the Reformation, through the Renaissance and on to the seventeenth and eighteenth century, this was a time when religious scholarship was updated with the discoveries of the New World and colonial expansion. These chapters present new work, shedding light on the interplay of philosophy and theology in key thinkers such as Montaigne, Leibniz, Bayle and Spinoza, but also in less known authors such as Gianfrancesco Pico della Mirandola and Sebastian Castellio.

Readers will discover analysis of the reshaping of specific theological issues, focussing on the reception of ancient philosophical traditions such as Platonism, Aristotelianism, Stoicism, Epicureanism, and scepticism. The authors investigate the relationship between the ethical models inspired by the heroes and philosophers of antiquity and the ‘new philosophy’. Above all, this book enables exploration of the ways in which discussions of the salvation and virtues of pagans intersected with the early modern reception of ancient philosophy, including a reassessment of the question of the moral status of unbelievers in the early modern period.

Students and faculty working on early modern intellectual history will find that this book both inspires and enriches their knowledge. Those with an interest in Renaissance humanism, the history of early modern philosophy and science, in theology, or the history of religion will also appreciate the new contributions that it makes.