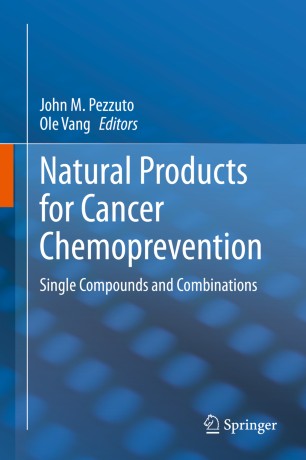 This book discusses the efficacy of various naturally occurring chemopreventive agents in preventing or delaying cancer. It focuses on the holistic chemopreventive concept, demonstrating the relevant response is the combined effect of a series of compounds that alone have been shown to have some effect in different experimental models.

Written by leading experts in the field, the contributions provide details of research on various chemopreventive agents. Offering insights into the unique molecular targets and mechanisms, safety issues, molecular efficacy, and occurrence in nature of these compounds, the book is a valuable resource for all scientists working in biomedicine, and specifically in cancer research.

John M. Pezzuto is Professor, Dean and Vice President at Long Island University in Brooklyn, New York. With long standing interest in cancer chemoprevention, he is an author or co-author of over 600 papers published in the scientific literature, including a seminal paper that appeared in Science describing the cancer chemopreventive potential of resveratrol. He is the editor of several books, included Grapes and Health and Topics in Current Chemistry. Vol. 329. Natural Products in Cancer Prevention and Therapy, both published by Springer.

Ole Vang is associate professor at Roskilde University, Roskilde. He has studied the health effects of bioactive compounds for his entire career, with emphasis on the effects mediated by indoles and resveratrol. He organized biannual international resveratrol conferences (2010-2018) together with several regional resveratrol meetings during the same period of time. His current research focus is on the combinatory effect of mixtures of bioactive components. He is an author or co-author of over 50 papers published in the scientific literature.