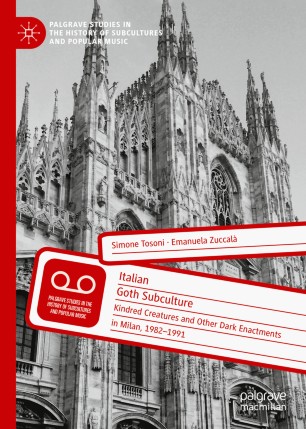 Kindred Creatures and Other Dark Enactments in Milan, 1982-1991

This book is the first in-depth investigation of the Goth subculture in Italy, focusing in particular on the city of Milan. It grows out of a three year research project - the first in Italy of this scope on the topic - based on the life histories of two dozen participants. In light of this, Simone Tosoni and Emanuela Zuccalà propose an innovative approach to the study of spectacular subcultures: contrarily to the most common accounts of the spectacular subcultures of the 80s, this book describes the experience of subcultural belonging as plural and internally diversified. In particular, three different variations - or 'enactments' - of goth are described in-depth: the politically engaged one; the one typical of the scene of the alternative music clubs spread all over northern Italy; and the one, common in the little towns surrounding Milan (but not limited to it), where participants used to 'enact' the dark subculture alone or in small groups.  Their book argues that while these three different variations of goth shared the same canon of subcultural resources (music, style, patterns of cultural consumptions), they differed under relevant points of view, like forms of socialization, stance toward political activism, identity construction processes, and even their relationship with urban space. Yet, contrarily to the stress on individual differences in 'subcultural' belonging typical of post-subcultural theorists, the Milanese variations of goth appear to have been socially shared, as socially shared were the different 'practices of enactment' of the subculture that characterized each of them.