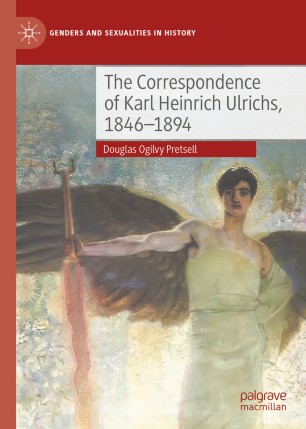 The Correspondence of Karl Heinrich Ulrichs, 1846-1894

This book will be the first critical edition of all the surviving correspondence to, from and about Karl Heinrich Ulrichs between 1846 and 1894. Ulrichs, a former Hanoverian lawyer, was the first to articulate a personal identity of sexuality that defined individuals by their sexual object. This articulation of sexual modernist identities is Ulrichs’ abiding legacy to the world. He wrote twelve short books between 1864 and 1879, arguing for the removal of laws and prejudice against 'urnings' and articulating a scientific theory that placed them as a third gender. He is a foundational figure in the history of sexuality, yet there has never been an edition of his complete correspondence in either English or the original German.
The correspondence between the years of 1846 and 1894 covers three definable periods: the years before Ulrichs began writing (1846-1864); the years between which all his principle works, his lobbying and all his activism took place (1865-1879); and his final years in exile (1880-1895). The analysis will contend that the correspondence reveals that Ulrichs’ project was not just a lonely campaign against legal prohibition of the 'hydra of public contempt', but instead was part of a far wider campaign of community-led self-definition that was actively promoted at home and abroad.

Douglas Pretsell is a researcher in the Department of History at La Trobe University, Melbourne, Australia, where his focus is on the correspondence of Karl Heinrich Ulrichs (1825-1895). With previous research experience in Psychology and Neuroscience, Douglas brings a
fresh perspective to a man who was to influence the very earliest sexual science in Germany.