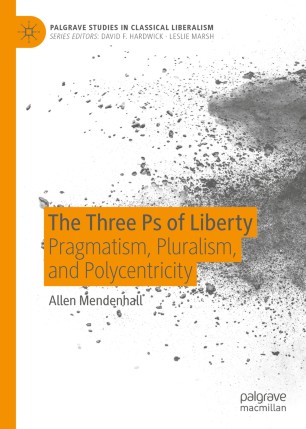 The Three Ps of Liberty

This book considers the “three Ps” of liberty: pragmatism, pluralism, and polycentricity.  These concepts enrich the complex tradition of classical liberal jurisprudence, providing workable solutions based on the decentralization, diffusion, and dispersal of power.

“Allen Mendenhall's The Three Ps of Liberty: Pragmatism, Pluralism, and Polycentricity gives the best account to date of "libertarian jurisprudence." Mendenhall argues that libertarianism should be understood as pluralism, basing his account on a conception of individual liberty that not only allows scope for the development of individual identity but that integrates a robust conception of human virtue. Drawing on figures like Hume, Burke, Hayek, and Oakeshott, Mendenhall offers a compelling picture of decentralized jurisprudence that makes common cause between virtue and liberty, and that provides a framework for a just and humane society. Libertarians, conservatives, and their critics from across the political-economic spectrum should welcome this careful and thoughtful investigation.” (Jim Otteson, Thomas W. Smith Presidential Chair in Business Ethics, Professor of Economics, and Executive Director of the Eudaimonia Institute at Wake Forest University, USA)

“Professor Mendenhall offers a thorough defense of legal pluralism, with a novel and persuasive intellectual history of classical liberalism’s roots. In the book, he portrays a vision of civil society that leaves room for competing mores through polycentric governance. This is a refreshing departure from the trend of promoting legal reform designed to purge apostates and enforce ideological purity.” (Stephen C. Miller, Adams-Bibby Chair of Free Enterprise, Manuel H. Johnson Center for Political Economy at Troy University, USA)

“The emergence of Donald Trump as the titular head of American conservatism has shattered the fusion of libertarianism and traditionalism that has comprised the modern conservative project. While repairing the political breach may prove difficult, Allen Mendenhall offers libertarian pluralism as a path forward for a fusionist project in legal philosophy. Along the way, Mendenhall examines not only the legal theory of leading libertarian and conservative thinkers such as F.A. Hayek, Michael Oakeshott, and David Hume, but unlikely allies such as Thomas Jefferson, Oliver Wendell Holmes, and even Louis Brandeis, and the modern Seasteading movement.” (Todd Zywicki, George Mason University Foundation Professor of Law, Antonin Scalia Law School, USA,  and Senior Fellow, The Cato Institute, USA)