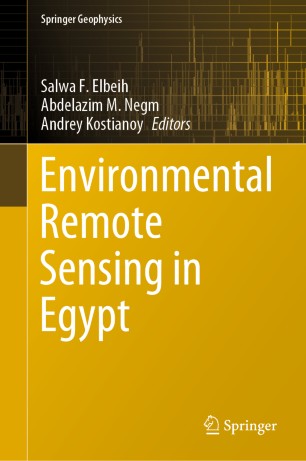 This book presents a comprehensive selection of applications employed in environmental remote sensing using optical and thermal infrared satellite-sensors aiming to map natural resources, crops, groundwater, surface water, aquatic ecosystem, land degradation, air quality, renewable energy, regional resources, and climate-related geophysical processes. The technologies presented in this book also include satellite images, space-borne radar sensors focusing on the most versatile one, data from synthetic aperture radar (SAR), scatterometers and radar altimeters in Egypt. This volume also presents a thorough explanation of the remote sensing role showing physical fundamentals of the climate change phenomenon including gas emissions, and the impact on resources concerning the sustainable development of Egypt. Besides, the book includes an analysis of oil pollution in both Mediterranean and Red Seas
This book is intended for environmental policymakers working in Egypt as well as scientists working with remote sensing technologies in highly populated arid regions.

Dr. Salwa F. Elbeih is an associate professor of Civil Engineering at the Engineering Applications and Water Division, National Authority for Remote Sensing and Space Sciences (NARSS), Cairo Egypt since May 2014. She obtained her Ph.D. and M.Sc. in Civil Engineering from Ain Shams University in 2007 and 2002 respectively. She is the head of the engineering applications department at NARSS and director of the publishing office of the Egyptian Journal of Remote Sensing and Space Sciences (EJRS). She is responsible for the grant office in the Knowledge and Technology Transfer (KTT) Office at NARSS. Her research interests comprise applications of remote sensing and GIS in civil engineering, environmental and geotechnical engineering, the relation between archaeological and water resources conditions.

Prof. Abdelazim Negm is a professor of Hydraulics at the Faculty of Engineering, Zagazig University, Egypt, since 2004. He got his Ph.D. in 1992 from Zagazig University (ZU), and his M.Sc. from Ain shams University in the year 1990. He was the vice dean of the Faculty of Engineering of ZU from 12/2008 to 12/2011 and was the head of the Environmental Engineering Dept. at Egypt-Japan University of Science and Technology (E-JUST), Egypt, from October 2013 to March 2016. He participated in several international projects since 2006 until now. He published more than 350 papers in national and international journals and conferences and contributed in more than 50 chapters. Some of his papers were awarded prizes of the best papers. He is the editor of several volumes at the Springer Handbook of Environmental Chemistry Series (HEC Series). Two volumes were published in May 2017, and 10 volumes were published in the year 2019. Additional, several volumes will be published during the year 2020. He is a member of the scientific committee of several international conferences and a member of the organizing committee of others and participated in more than 80 conferences as well. He delivered several keynote talks at international conferences. Prof. Negm is a reviewer of more than international scientific journals that indexed in Scopus and WoS. He is the editor-in-Chief of EIJEST,  an associate editor of the EMJEI,  which is published by Springer. Also, he is a member of the editorial board of several scientific journals. Moreover, he is a member of the editorial board of the famous Springer Series titled “Handbook of Environmental Chemistry since 2019 and the head of the permanent scientific committee on Water Resources for the promotion of professors and associate professors (115), the supreme council of Egyptian Universities, Egypt. Prof. Negm is listed in the most famous and prestigious directories in the world including  the American Biographical Institute (ABI), Inc, USA, "Marquis Who's Who in the World",  27th Ed., 2010, USA  until now and in IBC's 2000 Outstanding Intellectuals of the 21st Century by International Biographical Center, Cambridge, England, from 2011 until the present. Prof., Dr. Andrey  Kostianoy - Doctor of physico-mathematical sciences, Chief Scientist at the P.P. Shirshov Institute of Oceanology of the Russian Academy of Sciences (Moscow, Russia), a Visiting Professor at the University of Liege (Belgium), Honorary Professor of Tver State University (Russia). Prof. Kostianoy is a specialist in the field of physical oceanography, satellite remote sensing of the oceans and inland seas, regional climate change, environmental problems. He is also an expert in satellite monitoring systems designed for offshore oil and gas industry, as well as in operational integrated satellite monitoring of oil pollution of the seas. His research interests included the Atlantic, Arctic, Indian, and Southern Oceans; the Subarctic Seas; the Baltic, Mediterranean, Black, Azov, Caspian and Aral Seas; the dying lakes and seas; and Central Asia. Prof. Kostianoy is an author of over  200 peer-reviewed papers and 60 books published in Springer, Elsevier and Russian editions, most of which is devoted to the study of the Black, Caspian, Aral, Adriatic, Baltic and Arctic seas.