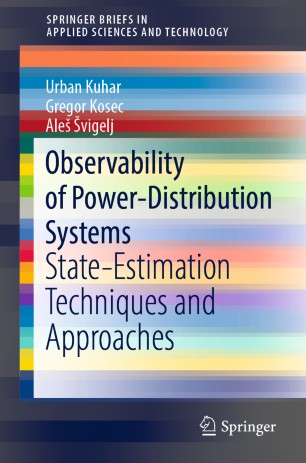 This book develops, implements and thoroughly evaluates a three-phase distribution system state estimation (DSSE) model. It gathers all relevant state-of-the-art knowledge and provides the missing pieces to offer readers a complete picture of several essential design and implementation factors and ways to address them.

The book presents a three-phase branch model that allows of conductors, transformers, tap changers, and voltage regulators to be modelled. Its main features include:

• numerical solution to the estimation problem.

This book presents a focused account of three-phase DSSE, making it of interest to postgraduate students, researchers and engineers in the field of power systems and distribution systems.

Urban Kuhar graduated at University of Ljubljana, Faculty of Electrical Engineering in 2012 and obtained Ph.D. in 2018 at Jožef Stefan International Postgraduate School, Ljubljana, Slovenia. He joined the Department of Communication Systems at the Jožef Stefan Institute in 2013. He worked in the field of high-frequency satellite communications, where he designed a Ka-band satellite beacon receiver within the ESA SatProSi project. He designed a synchrophasor measurement device suitable for distribution power networks, and designed and implemented a three-phase distribution state estimator software within the FP7 SUNSEED project. His research interests are related to digital signal processing, statistical signal processing techniques, and synchrophasor applications for power distribution systems.

Gregor Kosec graduated at University of Ljubljana, Faculty of Mathematics and Physics in 2006 and obtained Ph.D. in 2011 at University of Nova Gorica. In 2011, he became a member of Parallel and Distributed Systems Laboratory at Jožef Stefan Institute. His main research interest covers physical modelling, computational physics, meshless methods, and generic programming. In cooperation with colleagues he published 25 peer reviewed original scientific papers, a scientific monograph in Springer, 4 book chapters, and presented his work at 25 international conferences. He was awarded with 4 international rewards and 2 domestic rewards, namely with reward for exceptional contribution to the sustainable development and with Puh Certificate of Recognition. He is an active reviewer for several international scientific journals and is also active in organization of international conferences. In 2015 he led applied project “Analysis of de-icing by operational countermeasures” for ELES, Ltd., Electricity Transmission System Operator, followed by project Dynamic Thermal Rating of overhead power lines in icing conditions (DTRi) funded by FP7 TETRACOM. In 2017 he led project “Cooling of overhead power lines in low wind regimes” again for ELES, Ltd. From 2016 he is involved in FWO funded project “Multi-analysis of fretting fatigue using physical and virtual experiments” and in a technology transfer “System for mobile monitoring of vital physiological parameters and environmental context”.

Aleš Švigelj received his B.Sc., M.Sc. and Ph.D. degrees in Electrical Engineering from the University of Ljubljana, Ljubljana, Slovenia, in 1997, 2000 and 2003 respectively. He is a senior research fellow in the Department of Communication Systems at the Jožef Stefan Institute and associate professor at the Jožef Stefan Postgraduate School. In 2000/2001 he spent one year as a visiting researcher at Leeds Metropolitan University in Leeds, UK. He has extensive research in modelling, simulation, and design of advanced telecommunications elements, systems, and services. His current work focuses on the advanced networking technologies for wireless systems and smart grids. He has participated in several national and international projects including COST projects. Recently, he was a technical/scientific coordinator of the FP7 SUNSEED project. He co-authored several books/book chapters and more than 80 peer-reviewed journal and conference papers. In 2004 he was awarded the Jožef Stefan Golden Emblem Prize for outstanding contributions made to science in Doctoral theses in the field of natural sciences in Slovenia. He is member of IEEE.