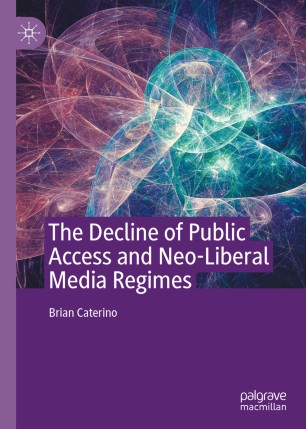 The Decline of Public Access and Neo-Liberal Media Regimes

This book examines the reasons behind the declining fortunes of public access channels. Public access, which provided perhaps the boldest experiment in popular media democracy, is in steep decline. While some have argued it is technologically outmoded, Caterino argues that the real reason lies with the rise of a neo-liberal media regime. This regime creates a climate in which we can understand these changes. This book considers the role of neo-liberalism in transforming notions of public obligations and regulation of media that have impacted non-profit media, specifically public access. Neo-liberalism has tried to eliminate public forums and public discourse and weakens institutions of civil society. Though social media is often championed as an arena of communicative freedom, Caterino argues that neo-liberalism has created a colonized social media environment that severely limits popular democracy.

Brian Caterino is an independent researcher who lives in Rochester, USA. He taught at SUNY Brockport, USA, and the University of Rochester, USA, and worked in public access for a number of years. He is the co-author of Critical Theory Democracy and the Challenge of Neo-Liberalism (2019).

“Brian Caterino’s The Decline of Public Access and Neo-Liberal Media Regimes contains the most detailed study that I have read on the decline of public access television and the rise of the Internet in neo-liberal societies. Caterino provides superb scholarship on public access, the rise of the internet, and changing notions of public obligations and regulations of media under neo-liberalism. In every instance, his scholarship is superb and illuminate the complex technological, economic and regulatory factors that led to the decline of public access TV and public media with the rise of neoliberalism and the internet that overpowered previous communications technologies.” (Douglas Kellner, George F. Kneller Chair in the Philosophy of Education, University of California, Los Angeles, USA)
Buy options