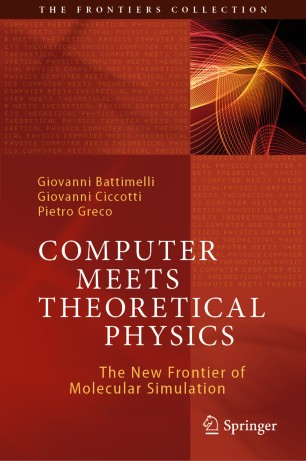 The New Frontier of Molecular Simulation

This book provides a vivid account of the early history of molecular simulation, a new frontier for our understanding of matter that was opened when the demands of theoretical physicists were met by the availability of the modern computers.

Since their inception, electronic computers have enormously increased their performance, thus making possible the unprecedented technological revolution that characterizes our present times. This obvious technological advancement has brought with it a silent scientific revolution in the practice of theoretical physics. In particular, in the physics of matter it has opened up a direct route from the microscopic physical laws to observable phenomena. One can now study the time evolution of systems composed of millions of molecules, and simulate the behaviour of macroscopic materials and actually predict their properties. Molecular simulation has provided a new theoretical and conceptual tool that physicists could only dream of when the foundations of statistical mechanics were laid.

Molecular simulation has undergone impressive development, both in the size of the scientific community involved and in the range and scope of its applications. It has become the ubiquitous workhorse for investigating the nature of complex condensed matter systems in physics, chemistry, materials and the life sciences. Yet these developments remain largely unknown outside the inner circles of practitioners, and they have so far never been described for a wider public. The main objective of this book is therefore to offer a reasonably comprehensive reconstruction of the early history of molecular simulation addressed to an audience of both scientists and interested non-scientists, describing the scientific and personal trajectories of the main protagonists and discussing the deep conceptual innovations that their work produced.

Giovanni Battimelli is professor in history of physics at “La Sapienza” in Rome. Amongst others he has co-edited the collection “20th Century Physics: Essays and Recollections - A Selection of Historical Writings by Edoardo Amaldi”.
Giovanni Ciccotti is, since 2015, an Emeritus Professor at “La Sapienza”, Rome. His research focuses on developing algorithms for molecular dynamics (MD) simulation of complex systems in condensed phases. Beyond the attempt to widen the domain of computer simulation in condensed matter he is also interested in challenging applications of atomistic MD simulations ranging from surface/interface physics problems in materials sciences to simulations of biological molecules, to find atomistic level explanations of their behavior or functioning mechanisms.
Pietro Greco is a science journalist and writer. He is involved, as author and scientific editor, in numerous internet, radio and television programs and was adviser of Fabio Mussi, the Italian Minister of Education, Universities and Research, from 2006 to 2008.