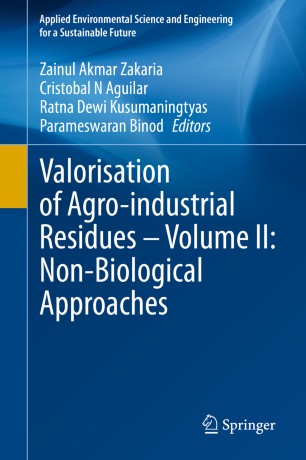 The world’s population is expected to reach the eight billion mark very soon. As a result, there is a need for increased industrial and agricultural production to ensure human wellbeing. This in turn generates huge amounts of waste. Current waste treatment solutions are effective, but usually require huge capital investment, are labour intensive and potentially lead to hazardous by-products.

This book presents the latest non-biological approaches to address issues related to the abundance of waste, offering insights into best practices in various regions around the globe. It highlights techniques such as chemical extraction, pyrolysis and ultrasonics, and a number of chapters include individual case studies to further enhance readers’ understanding. This comprehensive reference resource is intended for graduate students, researchers and scientists, and is also a valuable addition to all agriculture and biotechnology libraries.

Dr. Zainul Akmar Zakaria is an Associate Professor under the School of Chemical Engineering and Energy Engineering, Faculty of Engineering, Universiti Teknologi Malaysia (UTM). He currently holds the position of Associate Chair at the School as well as heading the UTMBactec Research group where he works on biomass valorization and microbial technology. He has Scopus h-index of 15 and has published 2 Research Books, 5 Edited Books and 10 Book Chapters. One of his research books was awarded the “National Book Award 2018” under the biochemistry category.  Dr. Zainul has acted as Guest Editor for Special Issues in 3 ISI-indexed journals, Evaluator for International Research Grant (Saudi Arabia, American Chemical Society, South Africa), Visiting Scientist to Argentina and Mexico as well as Program Head for the UTM-CONICET, Argentina R&D Program (2015-2017).

Dr. Parameswaran Binod is currently working as a Scientist in the Microbial Processes and Technology Division of CSIR- National Institute for Interdisciplinary Science and Technology, Trivandrum, India. He obtained Ph D in Biotechnology from University of Kerala, Thiruvananthapuram, India. He had then worked as Post Doctoral fellow at Korea Institute of Energy Research, Daejeon, South Korea and later joined as Scientist at CSIR- National Institute for Interdisciplinary Science and Technology, Thiruvananthapuram, India. His research interest includes biomass to fuels and chemicals, biopolymers and enzyme technology. He has more than 100 publications including research papers, reviews and book chapters. He is a recipient of several awards and fellowships including Young Scientist Award from International Forum on Industrial Bioprocesses (IFIBiop), France and Kerala State Young Scientist Award from Kerala State Council for Science, Technology and Environment. He is a Fellow of International Society for Energy, Environment and Sustainability. He is a National Honorary Advisory Board Member of Centre for Energy and Environmental Sustainability (CEES), India and Central Office Executive of The Biotech Research Society, India.

Dr. Cristobal Noe Aguilar Gonzalez is a Professor of Chemistry in the Universidad Autonoma de Coahuila, Saltillo, Mexico. He specializes in Fermentation Biotechnology and had prior experience working as postdoctoral at the IRD-Marseille, France. Prof Aguilar has published more than 150 research papers in ISI-indexed journals, 16 book chapters, 12 books and more than 250 contributions in scientific meeting. He was the recipient of various prestigious awards including National Prize of Research 2010 of the Mexican Academy of Sciences, Young Biotechnologist 2008 from the Mexican Society of Biotechnology and Bioengineering, National Prize AgroBio-2005 and the Mexican Prize in Food Science and Technology CONACYT Coca-cola Mexico 2003.

Dr. Ratna Dewi Kusumaningtyas is a lecturer at the Chemical Engineering Department of Universitas Negeri Semarang (UNNES). She was formerly the Head of Chemical Engineering Study Program (2015-2016) and the Expert Staff to the Rector for International Collaboration (2016-2017). She is currently assigned as the University Senate Member, Process System Engineering Research Group Leader, and Associate Editor of Jurnal Bahan Alam Terbarukan Indonesia. Ratna pursued doctorate degrees in Chemical Engineering Department, Universitas Gadjah Mada, Indonesia. During her study, she won Erasmus Mundus Euro Asia Scholarship for conducting mobility in Politecnico di Torino, Italy (2010-2012). During his career, Ratna has performed many researches funded by national and international grants, such Toray Research Grant Foundation (Japan), TWAS-Comstech (Italy), and CIDRA Networking Grant (UK). She also achieved awards such as: Scientific Publication Award (the Ministry of Research and Higher Education 2016), the Most Outstanding Lecturer of UNNES (2016). Travel Grant from Abiosus Ev. Germany and from SEAMEO-SEARCA Philippines (2009), Best Researcher of UNNES (2008), and Fellowship funded by US Department of State (2007). Ratna focuses on the researches which develop valuable products from natural resources. She is granted a national patent for her work in the field of biodiesel production.