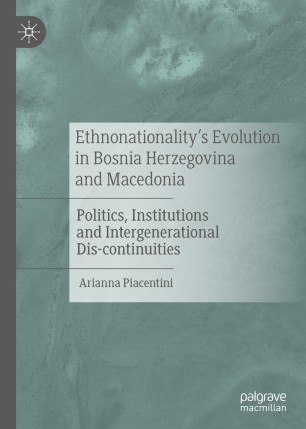 This book is centred upon the concept of ‘ethnonationality,’ investigating how its meanings and functions have changed across political regimes, time, and generations. Piacentini explores two similar yet different realities, Bosnia Herzegovina and Macedonia (now North Macedonia) – both former Yugoslav republics, multiethnic, and currently characterised by consociational arrangements and ethnic politics.

This temporal perspective encompasses both the Yugoslav and post-Yugoslav period, empirically exploring two generations living together in the same family, each socialised by different macro-environments and socio-political and economic conditions. The book explores which ideas, rules, and patterns of behaviour related to ethnonationality have been transmitted between the generations.

Ethnonationality’s Evolution in Bosnia Herzegovina and Macedonia will be of interest to students and scholars across a range of disciplines, including sociology, politics, and conflict studies.

Arianna Piacentini obtained her PhD in Sociology and Methodology of Social Research at the University of Milano, and is Postdoctoral Researcher at the Institute for Comparative Federalism at EURAC Research, Bolzano, Italy.

“Arianna Piacentini’s work manages to provide not only new empirical material in our understanding of the workings of ethnonationalism within a family, but her focus on day-to-day experiences also contributes to our theoretical understanding of ethnonationalism. By looking at Yugoslavia, as well as post-war Bosnia and post-independence Macedonia, this book highlights how socialism, war, state-building, shifting identities and the rise of nationalist discourse have affected families and different generations. The book is a must-read for everyone interested in how ethnonational mobilisation works, how it affects ordinary people, and what the deep political, economic and social changes in the former Yugoslavia have meant for individuals. It is so much more than a study of ethnonationalism in Bosnia and Macedonia, providing new theoretical groundwork for the study of ethnonationalism, and a window inside the lives of ordinary people and how they have been affected by the break-up of Yugoslavia and the ensuing conflicts.” —Soeren Keil, Reader in Politics and International Relations, Canterbury Christ Church University, UK

“The study offers a novel way of thinking about the post-Yugoslav context by focusing on ethnonationality in multinational states such as Bosnia and Herzegovina and North Macedonia, where there is little space for cross-ethnic civic engagement. Importantly, Piacentini questions the assumption that these identity categories are static. By focusing on how different generations employ these notions of identity, it traces the transformation of these categories, which are otherwise often presumed to be fixed and unchanging.” —Florian Bieber, Jean Monnet Chair in the Europeanisation of Southeastern Europe and Professor of Southeast European History and Politics, University of Graz, Austria

“Recent reappearance of ethnonationalist trends in the Western Balkans and throughout Europe is unpleasant reminder to all of us concerned with emancipatory values of modern polity, and why Arianna Piacentini’s research is of pressing importance. By telling us a coherent and conclusive story on the evolution of ethnonationalism in Bosnia and Herzegovina and Northern Macedonia, Piacentini offers us insight into the complex processes that cut way beyond political mechanisms of domination and deep into the very social fabric of contemporary societies, identifying the ‘micro-generational impact of macro-changes’.” — Asim Mujkić, Professor of Philosophy, University of Sarajevo, Bosnia and Herzegovina